After a relatively short flight back down to Perth (I found it hard to believe that it took less than 3 hours to cover the 4,500km/10 days we spent on the road) – I think I know which mode of transport I’ll be taking if I ever travel to Western Australia again.

Back in Perth for a couple of days, it almost felt like home and is a strong contender for my favourite Australian city so far. Even the Christmas shopping crowds were quite civilised compared to the UK, and I found the 30 degrees and blue skies a relief to the searing heat of Karinjini! Checking the weather forecast for the South Coast, I decided that I had better top up my tan while I had the chance and spent a relaxing few hours on the beach in the refined but very expensive (£6 for a bottle of Corona!) seaside resort of Cottesloe, just outside of the city. 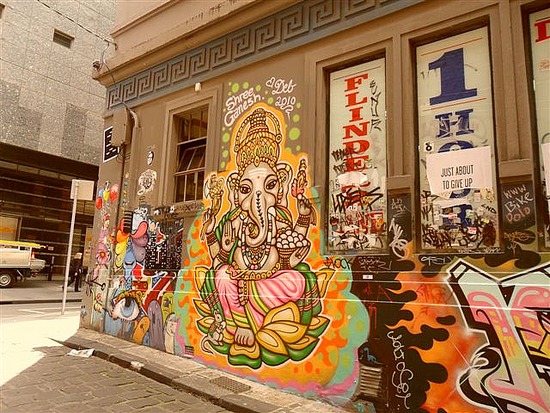 My next stop was Melbourne and my flight with low-cost operator, Tiger Airways made me vow never to complain about Ryanair ever again. After making us queue up on the tarmac for half an hour, we were finally allowed to board the plane and took off over 3 hours late (at 3am in the morning). What with the time difference, I arrived at my hostel in the suburb of St Kilda mid morning having had around an hour’s sleep. Undeterred, I took the chance to go on the city walk, led by the entertainments manager of the hostel. As the average age of most of the residents was around 20, I shouldn’t have really been surprised when instead of visiting the sights, she showed us down sleazy, graffiti covered alleyways, where apparently all the best clubs could be found.

Despite this, my first impressions of Melbourne were of an interesting historic, but vibrant city with a host of different neighbourhoods to explore and put me very much in mind of San Francisco without the hills. Vowing to return the next day to explore properly, I returned to the hostel to catch up on my sleep. 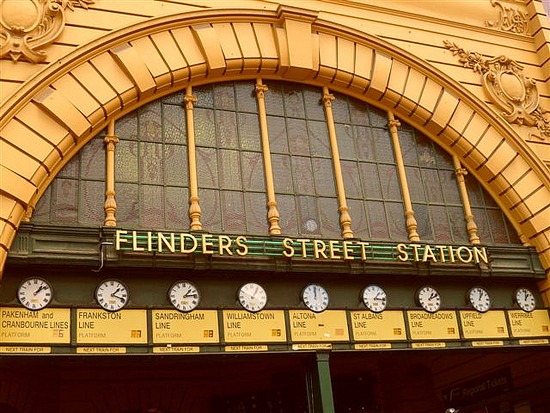 The following day, I caught the tram back into town and dodged the rain (Melbourne’s climate seemed depressingly similar to London’s) by jumping on the free tourist bus which did a circuit around the sights, including the “almost too arty for it’s own good” Federation Square, the gloriously dated Flinders Street Station, the modern complex around the docks, Chinatown and Parliament House. Walking back alone through Kings Domain just south of the Yarra River, I was left feeling slightly downhearted. I was really looking forward to my visit to Melbourne and I do believe that it has a lot to offer, but this is a city best enjoyed with company and money.

The stormy and cool weather the following day didn’t do much to lift my spirits, as I wandered down the bohemian streets of St Kilda, lined with fancy boutiques, impressive cake shops and cafes. The time-warped Luna Park amusement arcade and the Esplanade Sunday market all-too-briefly doused in sunshine, took my mind off the dark clouds, but I was once again soaked in a deluge just as I reached the end of the pier. 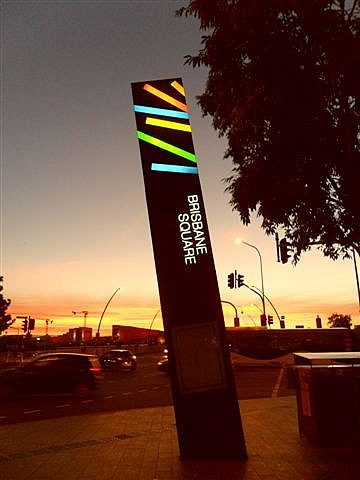 Jumped on a tram back into town to check out the famous old Queen Victoria Market (sadly, no sign of Dot Cotton or Peggy but plenty of traders hawking their fruit and veg). After a quick spot of lunch in Chinatown, I checked out the absorbing Australian Centre for the Moving Image in Federation Square.

The weather showed no signs of improvement the next morning and I found myself spending most of the day stuck in the hostel taking advantage of the free internet. Then one of the strangest things happened….Feeling the urge to go out for some fresh air, I was waiting for a tram into town when one of my ex-colleagues from London walked along the platform towards me! I knew she was travelling around the world too, but what were the chances she would not only be in the same city as me, but to have been catching the same tram at exactly the same time? It was incredible. 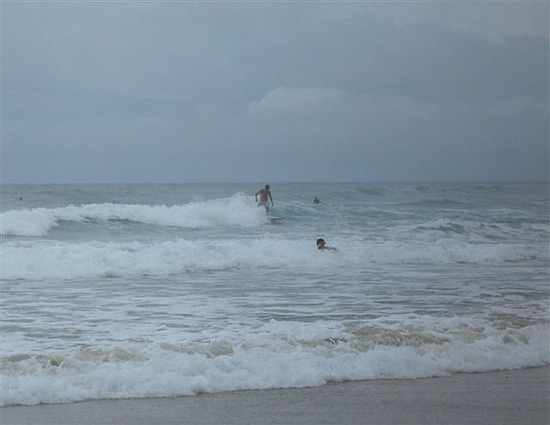 Was really happy to catch up with Deeps and arranged to meet up with her later for a meal. Happily, my rather disappointing stay in Melbourne ended with a good night out, I checked out the next morning for my flight over to the east coast, hoping for some sunshine. (I later learnt that the road we had driven up to Broome had been flooded and closed off and one of the towns we had passed almost washed away, so were fortunate to have done the west coast trip when we did).

It started off so well…the weather was glorious as I arrived into Brisbane and I enjoyed a pleasant stroll watching the colours reflecting off the river as the sun went down. Brisbane’s version of the South Bank reminded me very much of London’s and even boasted an arts centre, street entertainers, a market and even a large “Brisbane Eye”, although I’m not sure how popular the tropical swimming pool complex would be in our “not-so-tropical” climate. 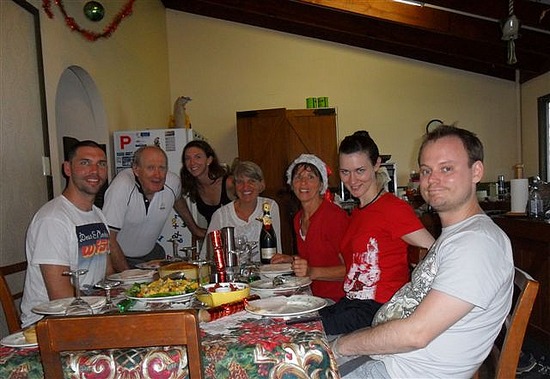 Tropical downpours would be the theme of the next few days, and I awoke the next morning to the predicted rain storm. I’d arranged to meet up with Urvy and Pete, who I’d met in New Zealand and killed time by doing something that I thought I’d gotten away with for this year – the dreaded Christmas shopping! Nothing as bad as London’s crowds, but it brought back bad memories nonetheless and after struggling through the crowds for a couple of hours I retreated back to the hostel.

Urvy and Pete picked me up and I revisited the South Bank (and our adventures in Kiwi Land) over a coffee and a cake. They were staying with a friend in Brisbane for Christmas, so we said our farewells and promised to meet up again back home.

The following morning I caught the bus down the coast to the notoriously awful resort of Surfer’s Paradise, where I was stopping off to meet up with my friend Mandy (who I worked with in London and who was now living back in Oz). 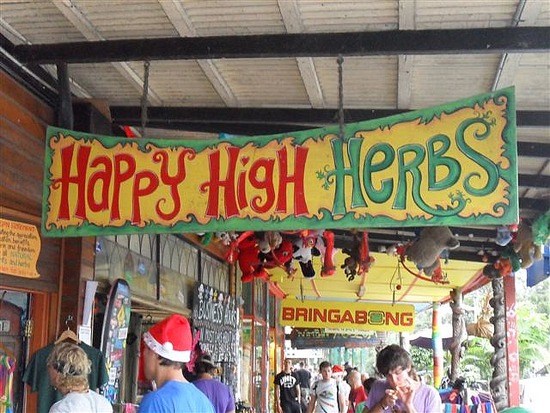 It certainly lived up to it’s reputation rather than it’s name (unless most surfers like fast food joints, overpriced bars and tourist tat with their waves?). My hostel was reviewed as one of the best on the “strip”, and came complete with volleyball pitch, cheap bar, blaring music and a pile of vomit outside my dorm – nice!

Luckily Mandy took me to more upmarket resort of Broad Beach along the coast for a Japanese meal and we spent a really lovely evening chatting and catching up. Glad to be leaving, I caught the early bus the following day further down the coast to Ballina (just south of Byron Bay) where I was looking forward to spending Christmas with my friends Shane, Phyl and family.

The rain had set in with a vengeance by the time I reached Byron, but jumping over the huge puddles at the bus stop I was met with a warm welcome (and apologies for the weather) by the family. 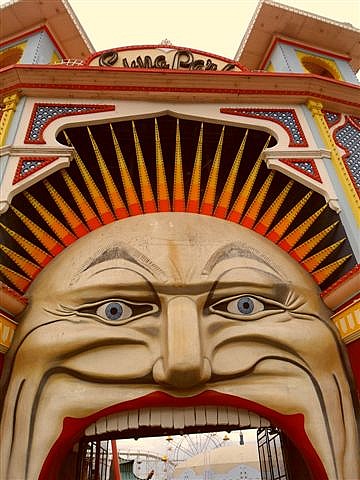 Much as I was looking forward to Christmas on the beach in the sunshine, it was wonderful just being with friends in the comfort of their large and cozy home overlooking (they assured me it was there, through the mist and rain!) the bay.

The rain and waterlogged roads prevented us travelling too far afield, but the family enjoyed their traditional Christmas morning swim together in the ocean (I bottled out – it just didn’t feel right swimming in the rain – even though the sea was warm) and I enjoyed watching the surfers riding the impressive waves. After a light lunch, we went to the airport to pick up their daughter Bridie (who I’d also met in Cuba), and the family (almost) complete, we spent a relaxing afternoon opening presents and eating, accompanied by the sound of the downpour outside. At least the frogs were enjoying it, and I had to put earplugs in most nights to get to sleep! It had certainly been a very different Christmas Day, and not quite the one I was expecting, but it was extremely relaxing and a very welcome change from hostelling!

Finding ourselves going a little bit stir crazy, on Boxing Day they offered to take me to the weird and wonderful hippy town of Nimbin. 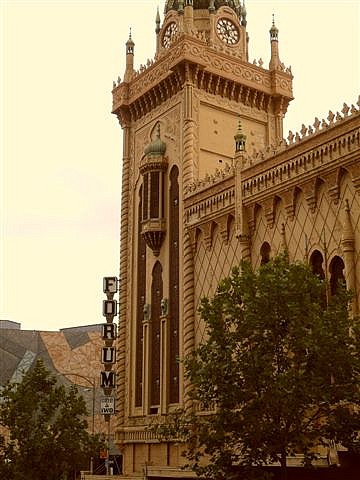 It was settled by new agers back in the 1970’s for the experimental Aquarius Festival and has remained a centre for the artistic, new age and eccentric ever since. One wall even featured an original “Rolf” graffiti  –how cool is that!. The boutiques, cafes and shops were a fascinating and fun way of passing a rainy afternoon, although if I’d had to put up with the gloomy weather much longer, I think I would have been tempted to extend the trip and take in the atmosphere, if you get my drift?!

After another round of fond farewells, I waited at the very soggy bus stop for my 12 hour ride down to “sunny” Sydney for the New Year Celebrations.