The bus journey was quite scenic – we followed the shoreline of Lake Titicaca. At one point, we all had to get off the bus, while it was ferried on a separate barge across a narrow part of the lake. Us passengers all then jumped on another boat and met up with it on the other side!

La Paz is a sight to see, thousands of houses and shops spilling down the mountainside surrounded by snow capped mountains.  The centre of town is a bit like Marrakech or Istanbul – lots of little side streets full of stalls, people, cars, dogs, you name it – all life is here! I quite like it – probably the most lively city I`ve been to since Havana. The drivers here however, have made my No. 2 spot in the league of the World`s Worse. 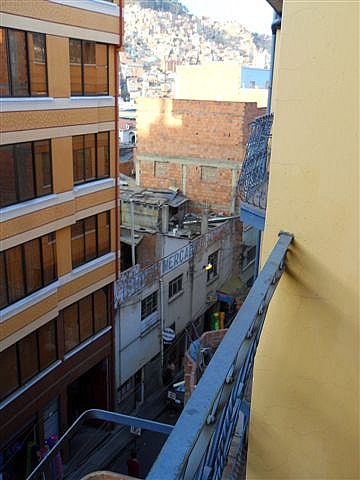 A welcome return to relative civilisation – my hostel here has all mod cons, like wifi, two beds with blankets, a tv (no remote though), a scary balcony, a scarier wall mural, a phone, and even a heater (although it didn’t feel quite so cold here). My room is on the fourth floor, and there was no lift, so what with the altitude, I could have done with some oxygen by the time I got up to my room. There`s also no fire escape, but I’m trying not to think about that. I’m so high up here, that if I do perish in a fire, at least I hopefully won`t have too far to go to reach the pearly gates!

Ventured out to find the hotel that I was to meet the group at tomorrow. I also tracked down “The Star of India” (a recommended restaurant in Lonely Planet) in my quest to find a decent curry outside of the UK. Was disappointed – the service wasn’t very good, and I had found better Indian food in Mexico and Guatemala. They did have “Llama Korma” on the menu though! 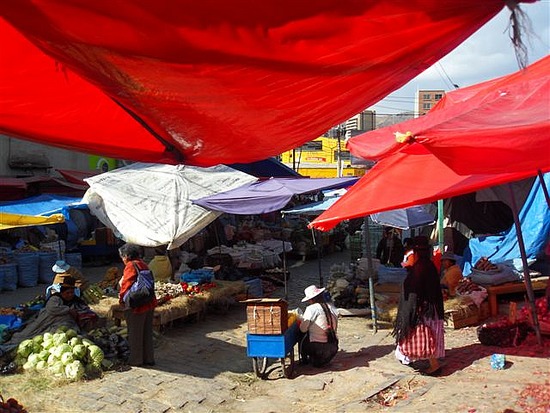 I was looking forward to exploring the town in the daylight. I found myself a bit lost returning back to the hotel – I remembered that my street had an old lady selling potatoes on the corner. However, when I got back, EVERY street seemed to have old ladies selling potatoes on the corner. I found it eventually, more by luck than judgment. My hostel seems to be in the “fabric (and potato)” district – there seems to be whole streets that sell the same thing, be it sanitary ware, or electrical goods, or stuff for Fiestas or hats, or very sweet and sickly looking cakes. It’s very odd, but strangely endearing, and the place certainly has lots of character, along with everything else. 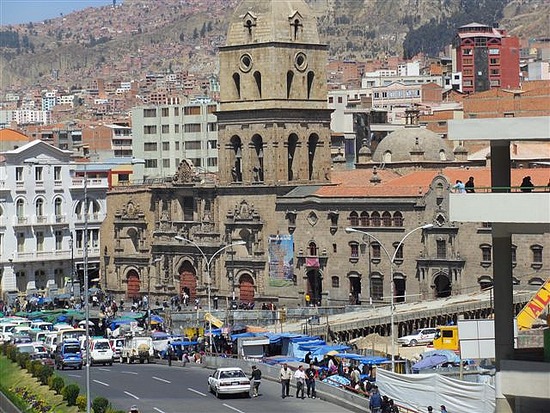 If having the roads cluttered with market stalls, people, dogs and cars etc. wasn’t enough, the street my next hotel was in, was also being dug up and re-surfaced! I therefore had to stagger down it’s very steep gradient on foot, with my rucksack. I wandered around a little more as I had a few hours to kill before I met the rest of the group. I found the going quite tough as this town has more ups and downs than San Francisco and every step took major effort with the altitude. Discovered the Witches Market, a tiny alleyway full of craft stalls containing everything you could possibly make with alpaca wool, plus some very macabre Bolivian white magic charms such as dried llama fetuses – yuk.

I finally met up with the rest of the group later that evening, after they had returned from a high adrenaline bike ride down the “Road of Death” – a 64km incredibly steep road where numerous people have lost their lives over the past 20 years. Feeling quite grateful to be far too old and sensible to do such a thing, I made acquaintance with my mad but intrepid companions for the next month; Kezia and Mark, a couple in their 30’s from New Zealand and 22 year old Kayleigh from Canada. Lupe – our young Peruvian tour leader went through the formalities, and we went out together for a Thai meal to get to know each other. The other three had been travelling through Equador and Peru together, so I had a lot of catching up and “bonding” to do. 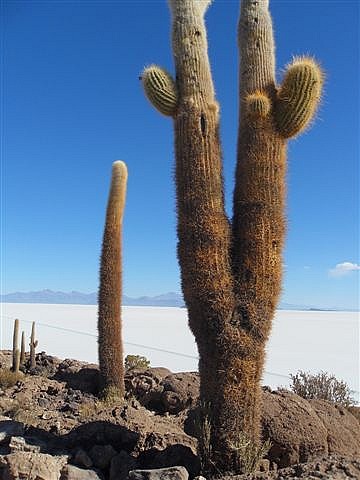 My last day in La Paz was spent on a short walking tour with Lupe, being shown the main sights, but also discussing life in Bolivia compared to her home in Lima, which was fascinating.

The following morning we set off for the bus station for our 3 hour journey to Oruro, where we were taking the overnight train to Uyuni, the gateway to the vast salt plains of the Salar de Uyuni. 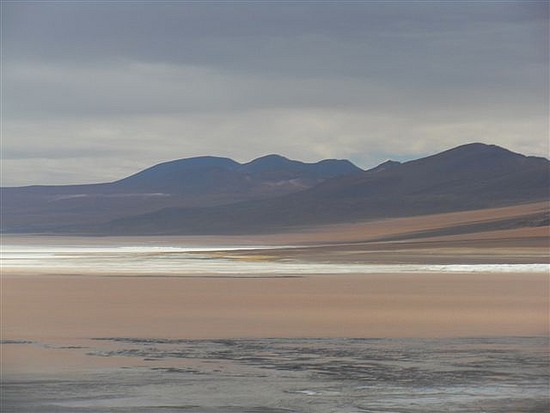 
We had been warned that the train journey might be cold, but we were issued with pillows, blankets and even an inedible meal and a very sweet cup of tea, so it wasn’t too bad. Arriving at a freezing cold station at 2am wasn’t so good though, but at least our hostel had warmed the room up for us and we were able to have a hot shower the following morning. Our trip across the world’s largest salt flat was going to take three days and we would be crossing the Atacama desert and travelling down to the Southernmost tip of Bolivia, climbing to an altitude of 4,700m.

Joining us in our all terrain vehicle were a really nice, but completely bonkers, couple from Italy (Romano) and Austria (Eva), plus our guide/driver and a local cook. After a quick visit to the frankly quite unimpressive “train cemetery” (lots of rusting old ex-mining trains) we hit the salt (or rather, it hit us – see below). 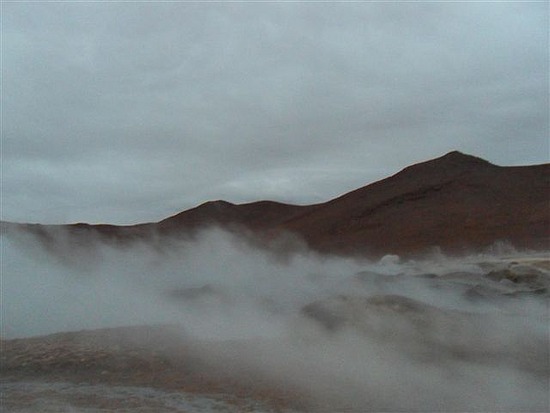 The completely flat, white and treeless landscape is utterly surreal – I had never seen anything like it before – in fact it features in several Salvador Dali paintings (“The Stone Tree”) and parts of the desert are even named after the legendary artist. It also lends itself perfectly to taking odd “perspective” photographs, where you can make things look bigger than they really are. Romano and Eva easily won the “most silly photos taken on any one trip” prize and each stop comprised of the rest of us taking shelter in the car while they took photos of each other jumping, pretending to be running, lying on the ground, on top of, under, looking through an adjacent rock/cactus/piece of wood (you get the picture).

We hit the salt “flat” literally and had plenty of time to take photos when one of the tyres blew on our jeep after only a couple of hours into the journey. Thankfully we didn’t have to rely on the Bolivian AA (they’d have probably turned up on a llama!) and our driver, with the aid of various other passing tour vehicles, managed to change it and fix the buckled wheel 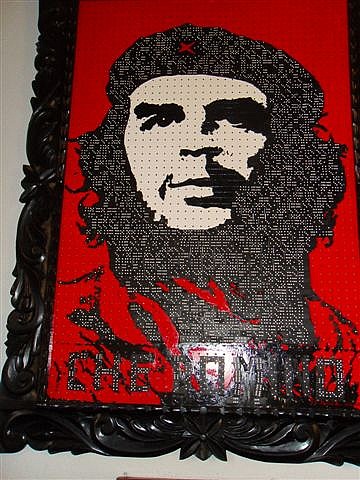 Che Made of Dominoes

We had lunch at Fish Island (because of it`s shape rather than any sea-life there) but which sported an impressive collection of cacti. The sun was at it’s hottest and felt even more intense reflecting off the white surface. A few more perspective pictures later, we set off for our overnight stop in a hostel made of salt. Even the beds were made of salt (I had visions of having dreams about kippers and giant pepper pots). We had one last foray into the desert to see the sun set and visit Galaxy Cavern, which thousands of years ago was an underwater cave containing interesting coral formations.

There were no hot showers and the power was turned off at 9.30pm so we had no choice but to have an early night and managed to stay relatively warm under several blankets and a sleeping bag. But we`d been warned that it was going to get harsher and colder 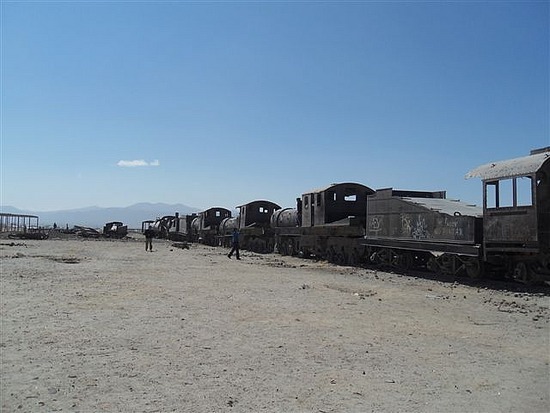 The next morning we set off south into the desert – an amazing terrain of volcanoes and multicoloured lagoons filled with pink flamingos. By now we were close to the borders with Argentina and Chile and our guide explained that Pinochet had planted landmines along the border with Bolivia in the 80’s and most of them were still there (a worrying notion when we set off along the pitch black tracks the following morning).

The weather had turned distinctly chilly and very windy, so it was becoming a bit of an ordeal actually getting out to take photos (and even more of an ordeal waiting for Romano and Eva to finish taking their obligatory “silly” shots). Our “home” that evening was a remote outpost in the middle of the desert, which although offering little in the way of home comforts, did surprisingly have a small store which sold exceptionally bad red Bolivian wine. 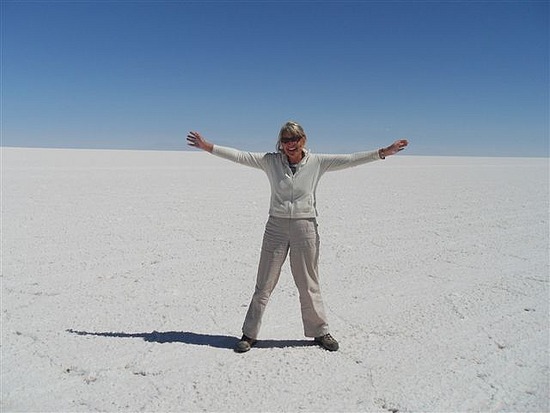 Has Anyone Seen the Salt???

We started chatting to English group who were staying there (including an ex-squaddie who used to bring the British troops out here each year for training!). Needless to say, several bottles later we were all feeling a lot better prepared for another freezing night in our 6-berth dorms. I comforted myself by thinking that this would be good practice for Glastonbury next year.

Up before sunrise for a drive out to visit the impressive geysers and hot springs of Sol de Manana. Since it was still absolutely perishing, and blowing a gale, I decided to opt for breakfast inside, rather than brave a dip. The incredible landscape continued and we drove through scenery straight out of a sci-fi movie. The temperature seemed to be dipping further, and it was trying to snow by the time we returned to Uyuni. A pizza, a hot shower and warm room had never been so welcome!