The world is a book and those who don't travel only read one page... 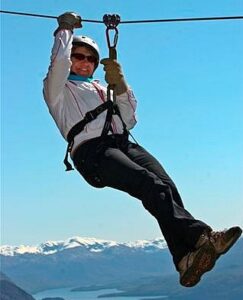 Welcome to my website – the end result of many frustrating hours attempting to master the mysterious (to me, anyway) arts of “web design” and “Wordpress”.  I really wanted a place to document my travels, share my trips with interested friends, and create a memory aid for myself and my carers when the inevitable Alzheimers sets in! “Adventure before Dementia” became my motto long before I embarked on my mammoth round the world expedition some 10 years ago now, and I am fortunate enough to have enjoyed more than my fair share of adventures for an (almost) 60 year old.

"I'm positive!!"...in different times, the words uttered by my partner would have been met with delight and encouragement, but they were NOT what I wanted to hear the morning we were expecting our COVID PCR results.

The summer was almost over, more Covid lockdowns were threatened and I desperately needed an escape. The list of countries on our exemption list was diminishing by the minute, and a damp weekend in Clacton just wasn’t going to cut it. So when my son Dan suggested we meet up in Cappadocia, Turkey my interest was piqued. I’d always been enthralled by the images of multi-coloured balloons gliding over the strange rock formations, carved out and inhabited by generations of cave-dwellers. So channelling my inner Flintstone, I “clubbed” together with Dan and my partner Ian and set off on our “mammoth” adventure.

The interesting terrain in this part of Anatolia lends itself to exploration by foot, and we have come prepared with our hiking gear (in Dan’s case an old pair of trainers and his school backpack!). We were grateful for our walking boots as the terrain became increasingly treacherous as we made our way along Pigeon Valley the following morning. After a few wrong turns, we were glad to make a pit stop at the Calgary Tea Room which surprised us as we rounded a steep bend on the route. The scenery resembled the American Wild West, with sandstone arches, majestic canyons and the ever present fairy chimneys. The Valley is named after the copious amount of pigeon houses carved into the rock. Apart from a food source, but now regarded as “sacred”, the ancients used their droppings as fertilizer – no sh#t!

We caved in early, in anticipation for our sunrise balloon trip the next morning. We soon reached the valley where we would begin our ascent and the sight of hundreds of hot air balloons in various stages of inflation was one I’ll never forget. Our excitement swelled along with the bright nylon as hot gas was pumped into it by huge fans, lighting the balloon up like a magic lantern. Finally, like Andy Pandy, Teddy and Looby Lou, it was time for us to jump into the basket.

Grateful for once that we’d chosen Dan as our nominated driver, we wound our way down the narrow lanes in our rented car and set off for a road trip to the Ihlara Valley. My impression of Turkey as a cultured but economically underdeveloped country was quickly dispelled as we passed factories and towns which wouldn’t have looked out of place in Western Europe.

After a very early start, we bid farewell to Ian at Istanbul (he was due to return to work so travelled straight back to London to quarantine!) and took the coach through the traffic into the city. Constantinople, as it was called back in the 30’s, had always sounded like one of those exotic places you read about in spy or adventure novels and I was looking forward to exploring. Dan had stayed here previously on a couple of occasions (once worryingly just before terrorists planted a bomb at a nearby nightclub). Istanbul had always been on my bucket list and I had originally planned to visit once things were safer - what better time than in the middle of a pandemic?!

The rain had eased a little the next morning so with aching legs, we rode the “Tünel” - a historic subway funicular built in 1875, making it the world’s second oldest underground urban rail line after the London underground. The line consists of only two stations, the historic carriages carrying you from Karaköy (sea level), climbing around 60 metres, reaching the upper station, Beyoğlu after travelling just over 500 metres. It doesn’t sound very far, but if you’d climbed as many stairs and hills as we had during this trip, it was a godsend!

Under the cover of semi-darkness, “Pearl Earring”, her code name for this mission, made her way through the park, hoping that she wouldn’t be recognised. She imagined suspicious eyes boring into her back and it felt as if she was dragging a headless corpse behind her instead of a wheelie case… Thankfully the station was deserted as she boarded the train to the docks to pick up the night ferry. Her first mission…. to reach Holland by first light, undetected…

"Let's meet somewhere in the middle", said Dan clearly missing his dear old mum (and some time off work) after four long months. And to be honest I was looking forward to some quality time with my eldest, not to mention a bit of r & r somewhere hotter than Essex.

Feeling like visiting royalty (especially as Dan insisted on wearing his ghutra (Saudi headdress) as a sun-hat, we were waved through the numerous check-points on the 4 hour taxi journey to Luxor. Apart from the half-built railway line that followed the road and the occasional car (and tank!) it could have been the turn of the century... the 20th century!

Sitting, once again, on route backwards and forwards from London to Perth, trying…but somehow never….quite…..succeeding…. to rack up enough Emirates Skywards points to upgrade to “Silver” card status. Oh how I covet that shiny little card – so much better than the plain old blue one, that they have somehow never gotten round to sending me. Each time I get within a couple of thousand miles of the magic figure I need, they expire and I’m left back at square one again. Firmly in the “no upgrades and extra luggage allowance for you, missy” level of social strata. If I had a silver card, well I would now be sitting amongst the bling in the Emirates lounge, with a cold glass of wine in my hand and a convenient convenience within easy strolling distance.

Hello Possums! Most of you by now will probably be well aware of the tumultuous events of my life over the past few months and know the reason why I am currently living in Perth, Western Australia. For those who have missed out on the catch up e-mails, Facebook updates, Skype calls, etc. here's an edited "omnibus" edition of my life since I returned to Oz...

Round the World Adventure 2010

So, here I find myself at another crossroads in my life about to take a deep breath and step into the unknown. I`ve been told that I`m `brave`, but I don`t think that it`s courage that`s brought me here. More a sense of curiosity and adventure to see what else is out there. A real drive to experience new places and people, visit at first hand those places I`ve pored over in brochures and travel books. And finally a quest to fit in as much `living` before I might lose the urge or be unable to do all those things I want to do and go to all those places I`ve always wanted to visit.