The pace slowed down further as I finally succumbed to the cough and cold that Ian had been nursing since before we left home.  Dosed up with various local remedies (amazing what you can buy over the counter here…), I was grateful that at least I now had the opportunity to rest up and recover.

We did stumble upon the local Irish bar run by a Geordie called “Scottie” (yes!) who was a wealth of information about the local area.  Over pie, chips and beans (but sadly no Guinness – they were waiting on a delivery from Bangkok!) he gave us some good tips on where to stay and what to do while we were there.

The At Sea Condos next door came highly recommended – and most of his clients seem to stay there (maybe he was on commission!), but we were very impressed when we went to check them out the following day.

We had originally planned on travelling around the country for a month or two before settling down somewhere, but this area felt so comfortable, that we were beginning to have second thoughts.  Plus we had arrived at the tail end of the rainy season and things hadn’t really opened up, which would have curtailed dive/boat trips etc.

I wanted to check out another resort before we made a decision (a bit like buying a dress really – I knew we’d probably go back the one we first saw!) – so we moved on to Noppharat Thara – a little closer to Ao Nang.  I’d even managed to book us a stay at a Palace for less than the price of a bottle of wine!  The Ayodhaya Palace Beach Resort was obviously once “the” place (or palace) to stay in this area, but having been closed down for over two years, it was desperately in need of some TLC.  Once you got past the impressive lobby with its intricate carved wooden walls and ceilings, the grounds of this huge hotel were slightly shabby and run down, although the three swimming pools were clean and inviting. 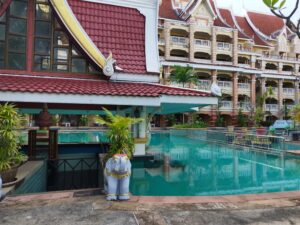 Some of the reviews described the hotel as being like “staying in a haunted house”, and I must admit the lack of guests did make it seem quite eerie at times.  However, our room was fabulous – spacious and well equipped, and I really did feel like a princess luxuriating in the bath whilst giving orders to my “manservant” through the carved windows! But just like the princess (and the pea) – I did have to ask the ever-attentive manager to add a mattress topper to my rock-hard bed…

We were a short stroll away from the beach and numerous bars, restaurants and shops on the promenade leading towards Ao Nang.  Still feeling under the weather, we didn’t venture too far for the next few days, but found a sports bar (run by the ever-informative Pete from Brisbane) which was showing the football.  Round the corner there was also an excellent night market where you could buy food of all varieties for under £5 with entertainment thrown in. This ranged from a traditional dance show, a very dangerous looking fireworks display to the Thai “Ed Sheeran” (sadly, the latter two weren’t on the same stage!).

My meal was finished off with a Thai “Ice Cream Roll” – watching them make these delicious deserts was entertainment in itself!  The vendor pours sweet milk onto a cold metal surface then continues to add and then ferociously chop fruit and flavourings to the frozen mixture before spreading it out with a spatula into a thin pancake.  They then scrape it into rolls, add sprinkles to the top, and hey presto!

Between the rain showers, we explored the nearby National Park and long-tail boat port (where you could take the ferry across to the numerous islands). It happened to be the birthday of the old (recently departed) King so was a public holiday (any excuse!) and we strolled past families enjoying picnics on the beach and all along the promenade.  There was even a kabaddi match taking place (looked like a cross between tag, rugby and Thai boxing!).

We made the decision to rent the condo for the month, and splashed out on a corner 2 bedroomed unit which came with a bath tub on the balcony, fabulous sea views and also, bizarrely, an electric organ! So, Ian can give me his rendition of Chopsticks while I’m lounging in the hot tub!  Relieved to be able to unpack at last, we settled in to our new home and stocked up with fruit and veg at the local market.  If we were desperate for a taste of home, there was even an international delicatessen a few kms away stocking cheeses, homemade breads and pastries for exorbitant prices.

Hunkered down for the next few days as a tropical storm hugged the coastline with heavy rain showers and leaden skies.  Grateful to be comfortable in our “home from home”, we caught up on all our Netflix and BBC iPlayer favourites, although I was going a little stir crazy, with just the occasional dart out to the shops for provisions – and a massage.  This was quite a different from the spa experience in the UK – instead of tinkly music in the background, my soundtrack consisted of lorries rumbling past, chickens clucking and children playing right outside the shop.  However, the massage was one of the best I’d ever had and at fraction of the price you’d pay at home.

We heard that Phuket had been flooded, so I guess it could have been worse, and the views of the storms coming in were quite dramatic from our 5th floor balcony!

Feeling very lazy after our enforced incarceration, I dragged Ian out for a long walk up the hill to the Dragon View Restaurant that we kept seeing signs for.  No sign of the dragon, or any other customers come to that, but the views were splendid and we replenished some of the body weight we’d lost in water on the walk up!

Encouraged by our climb (well, one of us was..) we hired a car for the day and decided to tackle the 1260 steps up to the Tiger Cave Temple. Glad we had set off fairly early, the strenuous ascent to the summit proved challenging to say the least, with some of the stone risers almost a foot high.  We eventually made it and were rewarded with fabulous views of the surroundings, and some very impressive gold buddhas protected by intricate demon god statues.

Gingerly making our way back down, we were at least kept entertained by the (by then) hoards of tourists struggling their way upwards. Back down to ground level, I had to guard my bag and my well-deserved ice lolly from the packs of long tailed macaques.  No sign of the tigers though apart from the plaster ones surrounding the temple!

Thankful to escape the heat for a while in our air-conditioned car, the next stop was the Emerald Pool, for a refreshing dip.  The car park was packed, but the wooden walkways leading through the lush forest made for a pleasant introduction to this natural water park.  Fortunately, the pool itself wasn’t too crowded when we arrived, and we spent a relaxing couple of hours cooling off in the crystal-clear waters.

Back to reality, we stopped off at the giant mall just outside Krabi Town for some retail therapy and to stock up on provisions.  Not quite “Lakeside”, but a definite improvement on the Seven Elevens! It was all beginning to feel a bit more like “life” rather than a holiday…

9 thoughts on “Thailand Fling 2 – A Change of Plans”