Potosí, Sucre and Santa Cruz – 2nd – 7th SeptemberWoke up to a light dusting of snow in Uyuni for our freezing cold 6 hour journey to Potosi by local bus, along a very long, winding and icy road that I think (judging by the dozens of JCBs and lorries we passed coming the other way) they were actually laying as we went along it.   I kept thinking it would suddenly end and we would hurl down a precipice.
At 4070m Potosi lays claim to being the world’s highest city, and it certainly felt it. Overshadowed in more ways than one by the additional 800m high backdrop of the Cerro Rico Mountain, the town’s ongoing mining history is both tragic and fascinating.
The silver and mineral deposits discovered within the mountainside allegedly kept the Spanish economy booming for the best part of 200 years. However, this was at the expense of the lives of millions of indigenous workers, followed by slaves brought over from Africa to work the mines. Working conditions today, as I was to discover, sadly are not much better. 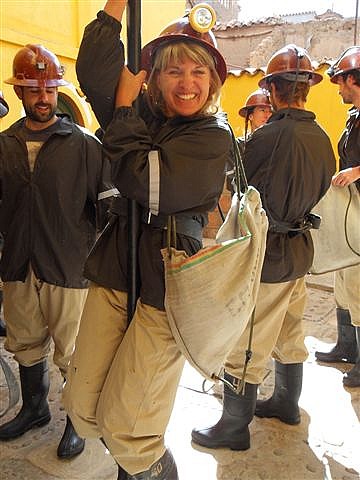 The co-operatives that own the mines employ workers on a freelance basis, and I was shocked to find out that children as young as 11 years old found the appalling conditions in the mine an acceptable and reliable way to earn a living (as we saw that evening in the award winning 2005 film “The Devil’s Miner”).
Many operators offered tours of the mines, and we were warned that these were not for the faint- hearted – they were working mines, with lots of dangers. Interest took the better of me, and we set off the next morning kitted out like fire-fighters in our wellies, waterproofs, helmets and torches. We were encouraged to buy small gifts for the miners (such as “alcohol, cigarettes and dynamite” – which I thought was the new Pogues CD??). These all sounded quite dangerous at first until we learnt that the average life expectancy in the mine was only 40 years, so I guess health wasn’t a priority. 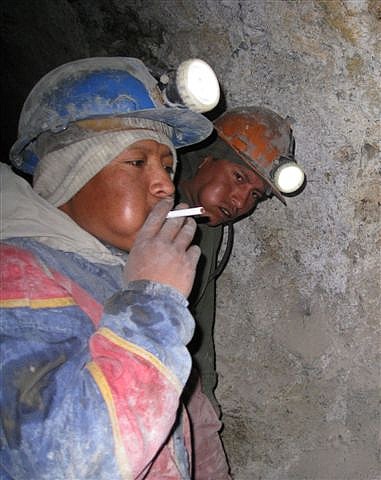 Should you really be smoking down here???


The locals were conned into working the mines by the Spanish who convinced them that they would be protected within the mine by Tio (The Devil) and there were ghoulish effigies all around the mines which the miners left offerings for. We entered the mine following tiny tracks and soon found ourselves quickly jumping out of the way of the trolleys containing the minerals which were pushed at breakneck speed past us. 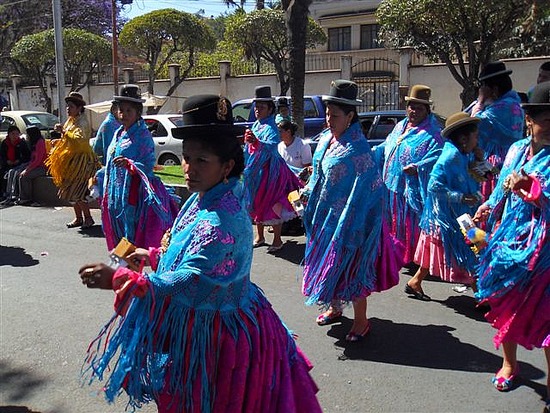 We were eventually led along smaller and smaller tunnels and down tiny holes in the ground, down rickety wooden ladders. A few dropped out and it took all my guts (and regular stops to catch my breath) to continue down four levels into the heart of the mountain. The working conditions were hot, dusty and incredibly claustrophobic, with no light apart from the miner’s gas-lit helmets and no fresh air. Most miners had huge balls of coca leaves in the mouths, as chewing these was supposed to give them strength and suppress hunger. We sat and chatted to a gang of miners who were sorting piles of rocks into those containing silver and those containing other minerals and gave us each one to keep. The miners worked shifts of up to 20 hours a day – incredible! They were happy to receive our gifts and we spent some time drinking toasts to their livelihood, the health and families – and to Tio, before we could stand it no longer and made our way back out to fresh air and daylight, with the worrying sound of nearby explosions ringing in our ears. (Not) The Train of Death

Glad to be back in the relative safety of the town itself (although I felt like hanging on to my face mask to protect myself from the awful pollution created by the traffic fumes), I found myself a nice little internet cafe for the afternoon. Other than the coin museum, which I decided to give a miss, there was nothing much else of interest to see.
We moved on the following day to Sucre, another pretty colonial town – the highlight of which for me was a proper supermarket at last! It also boasted several nice pubs and cafes, and as it was the weekend, and the weather was much warmer at this altitude, I spent a happy couple of hours sitting in a cafe up at the viewpoint overlooking the town. This town loves it’s parades and wherever we went that weekend, we could hear a band marching through town – from first thing in the morning to last thing at night. The groups that formed the parade ranged from schoolchildren to what looked like a group of Mafia Dons and they were giving it their all! It was so funny and entertaining to watch. 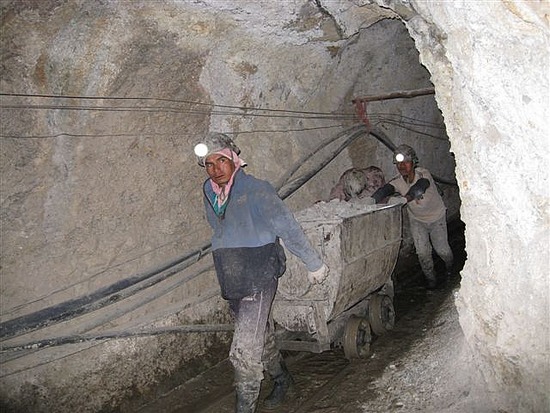 Down in the mine

I managed to fit in a visit to a local orphanage before leaving – there were several organisations in town that asked for donations and volunteers, and it was very moving, but gratifying to see the little ones being well cared for. I felt tempted to smuggle one cute little fella called Nigel back home with me! However, judging by the number of small children that we saw begging around the town, I feared they were fighting a losing battle.
We flew out that next afternoon to Santa Cruz, Bolivia’s biggest city and home to most of its industry as far as I could see. The short flight saved us a 16 hour bus journey which we were grateful for. The city centre was laid out around a grid system, and I have upgraded Bolivian drivers to joint No. 1 Worst in the World (at least there aren’t so many cars in Saigon), due the fact that they seem to have no rules at junctions other than “every man for himself”. I have come to the conclusion that the Bolivian Highway Code can be written on the back of a postcard, that wing mirrors here are nothing more than status symbols, the sole use of rear view mirrors is to hang crucifixes on, and that the safest way to cross the road is in a tank! 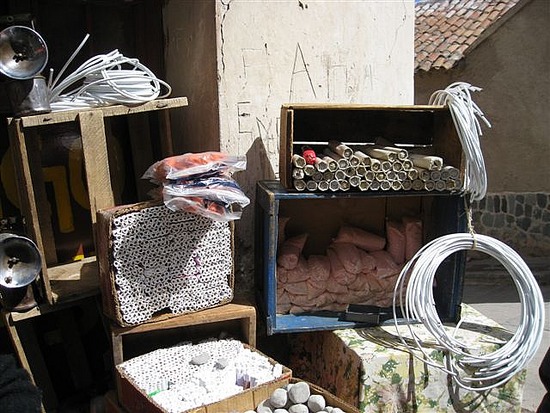 Get your lovely dynamite here!

We escaped out of this melee the next day to visit a waterpark, whose owner was proud to show us the “Indiana Jones” pools – that were still in the process of being built! We managed to find a pool that was freezing cold, but nevertheless was finished and spent a welcome few hours chilling out in the sunshine.
We had all voted to pay extra to upgrade our overnight train trip from the “Train of Death”. I can’t begin to imagine what that would have been like, as our “luxury” train rattled along the tracks like it had square wheels for a painful 14 hours. After a sleepless night, we reached our final destination Quijarro, on the Brazilian border – tired but excited to be embarking on a new adventure in the Brazilian Pantanal.

The mine still looks pretty roomy compared to the Central Line. At least you now have another skill should you need a job down pit.

You immediately reminded me of Bridget Jones in that scene where she is filmed coming down the firemans pole! Happy travells. x