Wet and Wild in the Pantanal...

The crossing into Brazil was fairly straight-forward – but we came to a police check point within a few miles, where several plain clothed cops steamed down the bus demanding to see passports and identification papers and searching people’s bags. This all seemed a bit over the top and a huge imposition, until I remembered what our cops had done to an innocent Brazilian in London a few years ago, and I didn’t feel quite so violated!

Several hours later we arrived at our pick up point for the last leg of our journey into the vast tropical wetlands that cover a large part of Brazil, The Pantanal. Not sure what to expect, we were loaded along with our luggage into the back of a truck, which trundled down the 145km long Transpantaneira Highway which dissects the area. 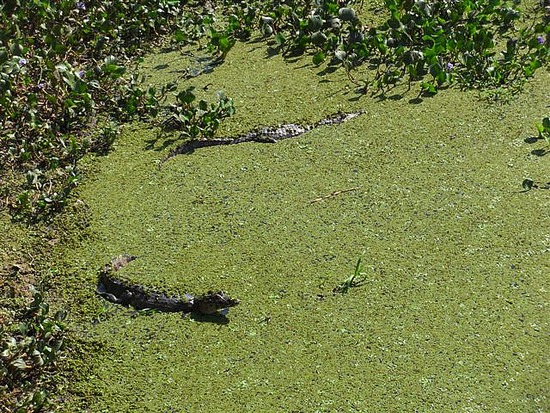 Welcome to the Pantanal

When I say “highway”, think dust track – you could see another vehicle coming towards you from miles away and had to suffer the cloud of dust as it passed you. At least this partly obliterated the very rickety bridges build over the wetlands at strategic points – like swamps full of caimans! In fact one of the first bridges we came to had partially collapsed tipping a lorry on it’s side into the water. Sadly the truck was full of livestock and one of the first things I saw was a cow’s head sticking out of the water – minus the body! Several other bits of cow were floating around in the swamp, but I had a feeling they wouldn’t be there too long judging by the interest shown by the surrounding vultures and caiman. Welcome to the Pantanal! 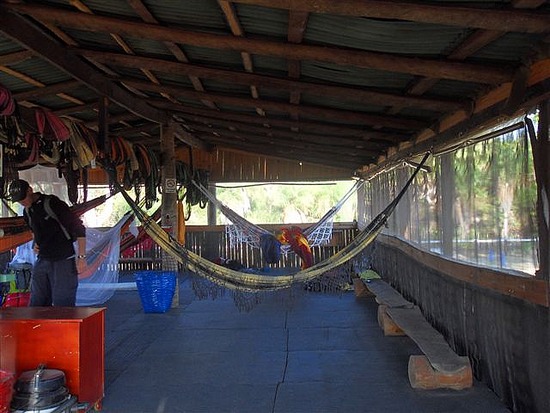 After an uncomfortable and very nerve-wracking journey along the track we finally arrived at our camp – the Pousada Santa Clara, where we were shown to our hammocks in a shared room at the top of a wooden hut. It was better than it sounds – the room was screened, and they even had a hot shower – and most importantly – a bar! The wine list was not up to much, but they did a wicked Caipirinha.

We had the rest of the day to relax and watch the caiman sunning themselves on the bank of the adjacent river. We were assured that it was perfectly safe to swim as “they are more scared of us than we are of them”- hmmmm…. The vultures were obviously not of the same opinion and I decided not to put it to the test. The natural air conditioning seemed to work that night, and I had a relatively good night’s sleep apart from the thin mattress I chose over the hammock, and one irritating bird that sounded like a car alarm going off all night. Bloody nature! 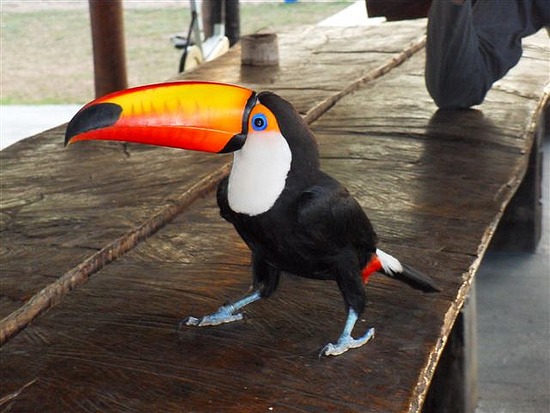 The following day featured a boat trip down the river, where we spotted storks, kingfishers, macaws, butterflies and capybaras amongst other creatures. It was very peaceful, apart from the obligatory piranha fishing, which I again opted out of. We did find a set of jaguar tracks, which was the closest we ever got to seeing this elusive big cat. After lunch we were offered a horse ride across the plains, which again was a slow but enjoyable way to watch the sun setting over the Panatanal.

During the bumpy and dusty (and rather scary as we were travelling over the same dodgy bridges but this time in the dark!) Night Safari, we discovered that we really should have been there during the wet season when we might have stood a chance of actually seeing some wildlife! The poor guide desperately tried to find something 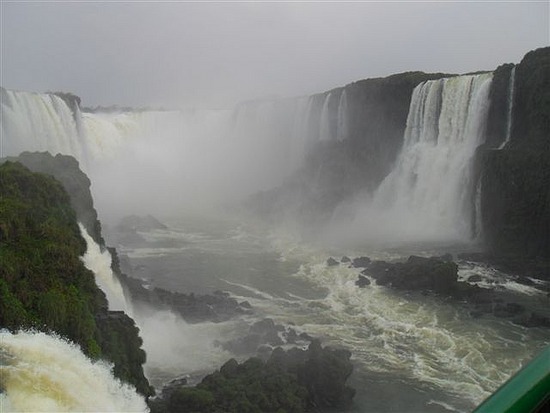 … anything, and we had to settle for a couple of deer and a fox (both of which were the average night’s roadkill back home in Essex!).

After another rather futile trek in the morning, we bade a fond farewell to our hosts at the Pousada and set off down the dusty road again for the last time. Our 4 hour journey became 7 hours once the bus finally arrived to pick us up and made a detour to drop others off at another town. We arrived exhausted in the very touristy town of Bonito, on the edge of the Pantanal, and had our first taste of how expensive Brazil was going to be.

My grasp of Portuguese is not great, and I decided to adopt the strategy that the English use in Spain, by speaking to them very loudly and slowly in my bad Spanish and hoped they understood. The results were variable and it always seemed to take us an eternity to order a meal. I soon came to the conclusion that there was no word (or concept) of “vegetarian” in Brazilian. I could see myself embarking on a budgetary imposed diet for the next few weeks. 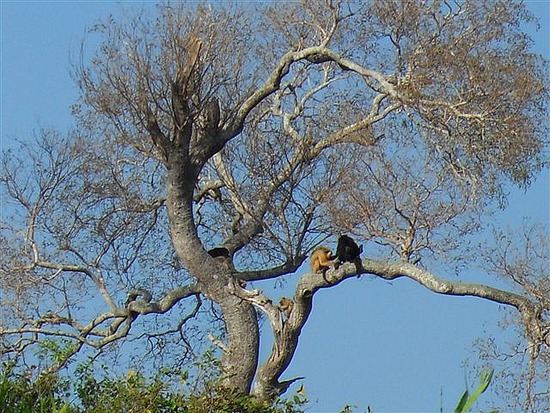 Monkeys in the Pantanal

It was good to be back in a comfortable bed with air-con for a couple of nights, and we set off refreshed the following morning for a cycle to the local river which had been turned into natural swimming pool along with fishes, where you could hire snorkels and deckchairs for the day. Very relaxing, and just what the doctor ordered, as we had another 20 hours on a bus to look forward to the following day for our journey to Iguacu Falls.

We survived the bus journey and arrived in Iguacu around lunchtime. We’d arranged a visit to the Brazilian side of the falls and were under-impressed by the Welcome Centre, whose exhibits seemed to have been translated into English by a dyslexic Mongolian. Things improved when we set out on the trail to the falls and the views became more and more spectacular. The falls advertise themselves as higher than Niagara and wider than Victoria Falls and separates three countries – Brazil, Argentina and Paraguay. The Devils Throat is the highlight of the falls and churns out water at an amazing rate with mist rising over 150 metres above it. We were sceptical that the Argentinean side would provide any better views. 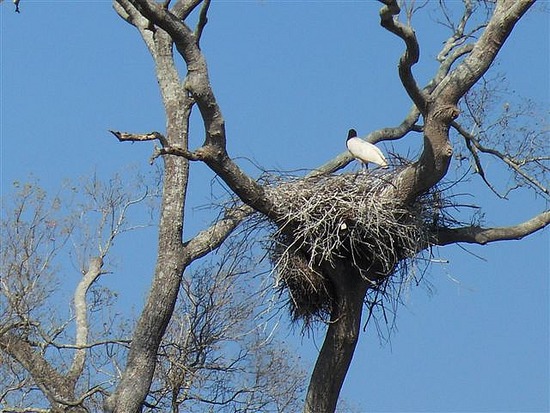 After a quick dinner in a rain swept and stormy city, we awoke to a slightly cloudy day to visit the Argentinean side of the falls. Convincing them of my strong feelings about Maggie and the war, I was allowed into Argentina with no problems and we commenced our visit. The Argentian side of the falls allowed a much more close-up view of the many different falls and I was again wow-ed by the area covered by the falls and the volume of water gushing out. It truly seemed one of the main wonders of the world – a stunning insight into the force of nature. I felt humbled!

We tumbled back into Brazil for our epic 25 hour bus journey towards the coast and it`s celebrated beaches.