Paraty, Ilha Grande and RIO!!! – 15th – 25th SeptemberThe epic day-long bus journey to Paraty wasn’t nearly as bad as I’d expected. We were booked on a “cama” bus, which means the seats are huge and recline almost all the way back. I managed a fair bit of sleep until we reached Sao Paulo, our changeover point. The next bus wasn’t quite so comfortable, but I managed to keep myself awake until we reached our destination late that afternoon.Apparently there was a photographic exhibition taking place in the town and I was followed down the road from the bus station (unbeknown to me) by a woman taking photos as I wearily dragged my backpack down the road (maybe for the worst-dressed, most shattered looking tourist photo display??). It was wonderful to have a hot shower and reasonable bed for a couple of nights. 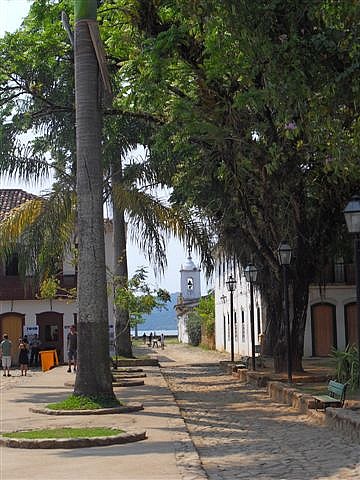 We’d planned to go visit the wonderful beaches and islands that the area is famous for the next day. However the weather decided otherwise, but only having one day, we braved the drizzle anyway and set off for a fairly miserable boat trip. The rain did stop for most of the day, but tropical islands don`t really look their best with grey skies in the background (I’ll have to Photoshop my photos!). We were treated to “live music” all day on the boat, and were also treated to a bill for the live music at the end of the day – both of which I could have done without – maybe it was just the mood I was in… Cheered up considerably after a night in bed with a bottle of wine, a bag of peanuts and a DVD for company – simple pleasures!The following day was more promising, and I spent a happy morning wandering around the picturesque cobbled streets admiring the photo displays and the pretty harbour, before we caught our next bus to Ilha Grande, one of Brazil`s largest islands. 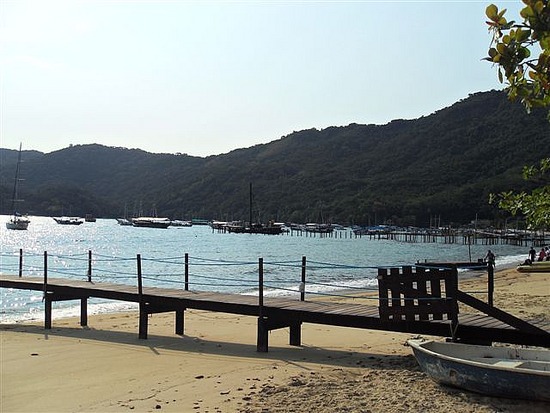 I began to wonder if the bus driver had learnt to drive at the Michael Shumacher School of Driving as we swerved wildly at high speed along the winding coastal to catch the ferry to Ilha Grande. I made a mental note to let Dan know he has a promising career ahead of him as a Brazilian bus driver if he flunks his degree! Amazingly we made it to the ferry and an hour or so later and disembarked at the beautiful port of Abraao. There are no cars on the island and after being warned our hostel was a 15 minute hike uphill, we opted to pay for our bags to be dragged up the hill by a man with a cart – good move. The hostel was charming – build around the natural boulders that make up the island, and with a waterfall at the bottom of the garden. Each room had a small deck with hammock and sun chairs – if only we had seen the sun during our stay – it would have been wonderful!After one extremely boring day when it tipped it down all day (the DVDs and alcohol came to the rescue once again), the following day we decided to brave a boat trip to what is billed as one of Brazil’s most beautiful beaches – Lopes Mendes . 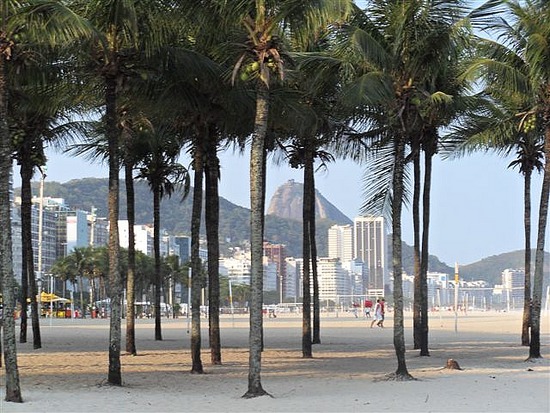 The Hotest Place South of Havana…

A trek through some dense rainforest led to a stunning white sand beach, but again, the leaden skies didn’t really do it justice – not to mention the odd sight of dozens of dead penguins lying around surrounded by vultures and a weird looking giant tiled sculpture stuck in the middle of the sand – I was beginning to feel like I was on the set of “Lost”. But the sun did come out, albeit briefly, and Mark, Kezia and I enjoyed a romantic stroll the length of the bay!Couldn’t you just guarantee that the sun would be blazing the next day, when we caught the early boat back to the mainland. But we were all feeling quite excited to finally be on our way to one of the world’s most vibrant and sexy destinations – Rio de Janeiro.Our hotel was a volleyball’s throw away from Copacabana Beach and it was thrilling to be walking along the world famous promenade soaking in the sights.. And what sights they were! It’s a great place to people watch. This place should really win the award for “most inappropriate use of shorts” – bottoms of all shapes and sizes are squeezed into some of the tiniest shorts I have ever seen! And not just on the beach… If this wasn`t enough, there are gym frames every few yards where young men were either limbering up or simply posing. Not that I really noticed, of course. 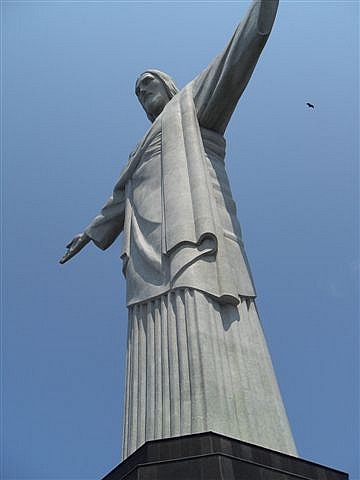 While we were there the “Homeless World Cup” was taking place along the beach. If only I had brought my footie kit, I could have represented England (I think I qualify!). Strangely enough, only Scotland were there from the UK!The next day, I said my goodbyes to the group – we all agreed that the past few weeks had flown by – but I felt quite happy to be back on my own again, and began to plan my itinerary for the next few days. I made myself at home at to my hostel, which was close by and again a short walk to the beach. It was one of the best I`ve stayed in – scrupulously clean and with great facilities – although I probably increased the average age by a decade or two! 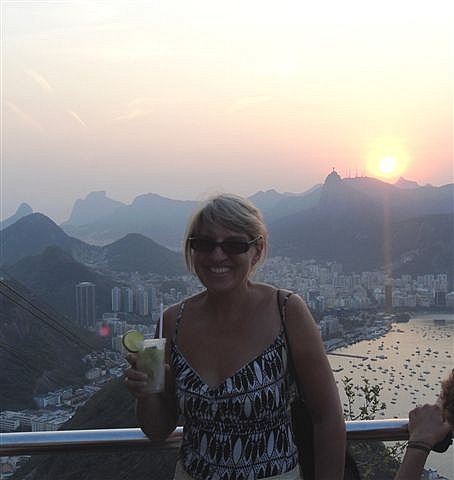 
The way everyone was talking about “going to see Christ”, I felt like I was at a religious retreat, but was relieved when I realised they meant the huge statue which overlooks the entire city. So my first day of freedom began with a trip up the mountain on the cog train to see Christ the Redeemer, and I must say he looked pretty good, and the views from up there were incredible too. It was an ideal way of seeing all the sights in one go! I decided to hit the heights again later that day and planned a trip up to the city`s other iconic viewpoint, Sugar Loaf Mountain, to watch the sunset.I’d forgotten that the cable car to reach the summit was where James Bond fights off Jaws in the film “Moonraker”. 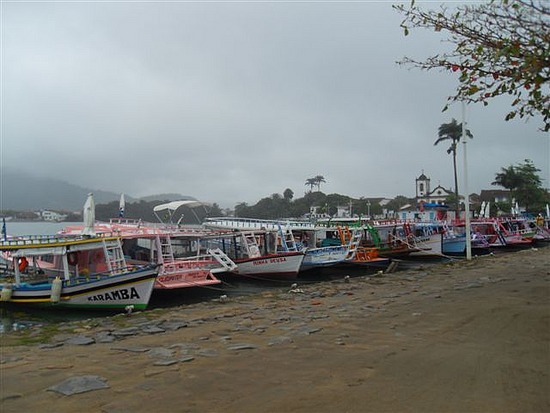 There’s a storm a Brewin’

Fortunately, I only had to fight off hoards of Japanese pensioners and the lift up to top offered again some incredible views of the city. Watching the sun go down with a cocktail in hand (had to be done) was one of the highlights of my trip, and a moment I’ll always remember. Made a mental note to come back someday and share it with someone (preferably someone with lots of money!)Back down to earth, I went on a fruitless (and vegetable-less) quest to find a reasonably priced meal that didn`t contain meat. The best option seemed to be the buffet restaurants that offered food by the kilo. Debating whether a slice of tomato weighed more than a piece of bread was challenging, but I managed a half decent portion of salad and a bit of quiche, which was the best meal I’d had since I left Mexico.I had started to pick up a few words of Portuguese. The word for hello is “Oi”, which is most disconcerting, as every time I heard anyone call it out, I instantly felt like I`d been caught doing something wrong and it feels quite rude addressing people with it! I must have started looking like a local too, as I didn`t get too much hassle from the beach vendors and was even asked directions. 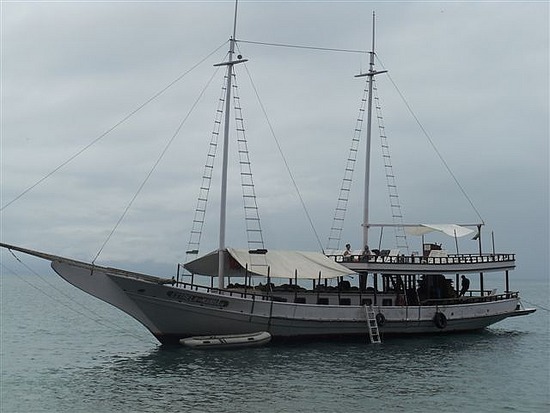 I felt confident enough to try out the metro, and set off to see a Samba show the following evening. The area with the best clubs was reputedly slightly dodgy, and I had been told not to carry a bag, so I had money secreted all over my person. I employed the tactic of walking along looking like I’d just had a row with someone – which seemed to keep the muggers away! The show was great and the club packed with locals dancing – I didn’t feel brave enough to join in (I was also worried I’d shower the dance floor with my loose change!).My last day was spent visiting the hilltop suburb of Santa Teresa with it’s cobbled streets and bohemian cafes and old houses. The rickety old tram up the hill was an experience not to be missed as was the return journey back down the hill which takes in the amazing tiled staircase by eccentric Chilean artist Selaron, who repeatedly covers the 215 steps with thousands of different tiles from around the world on a regular basis. 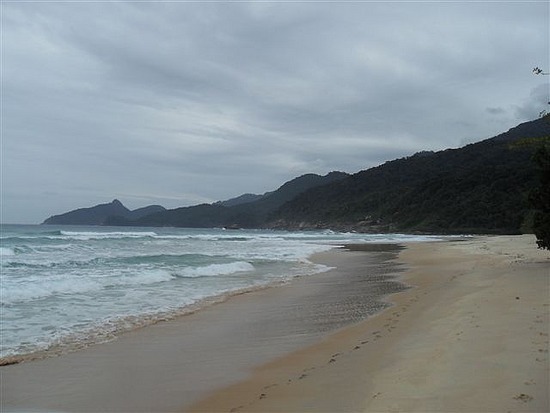 After lunch I caught the bus down to Leblon – the far end of Ipanema and walked the length of both Ipanema and Copacabana beaches, watching the locals play volleyball and surf as the clouds rolled in and the sun set on my last day in Rio.Off next to a completely different, but equally as exciting city – Buenos Aires.