A brief respite from slumming it, and a few glasses of champagne in the VIP Lounge later, I boarded my plane to a new country and another iconic city, Buenos Aires. A very kind Argentinean lady on the plane gave me the lowdown on what to do and where to go, and I was beginning to look forward to an extended stay in what looked like one of South America’s most European capitals.

I never thought I would be relieved to be speaking Spanish again, which for me is still very stilted, but heaps better than my Portuguese. At least I managed to negotiate the shuttle bus to my hostel, which was close to the Obelisco, as the name suggests, a huge and rather phallic landmark close to the theatre district. Strong similarities to London made me feel as if I was in Shaftesbury Avenue, which felt strangely comforting. Cosy in my little attic room, I planned an early start the next day to catch the famous market in San Telmo. 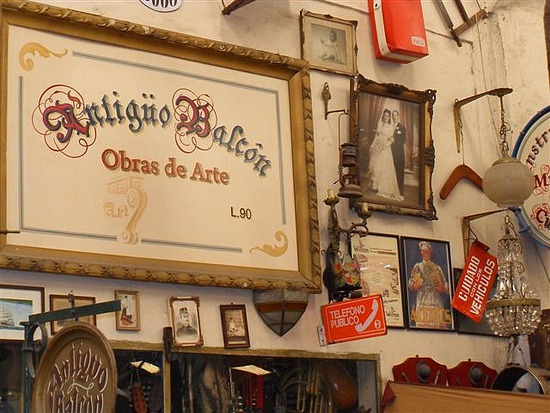 Awoke to a fabulous sunny and warm morning, I strolled down the cobbled streets of the antique district towards Plaza Dorrego where I’d hoped to catch an open-air tango show. The market was a cross between Portobello and Camden, and I spent a contented couple of hours wandering in and out of the old mansions full of antique stalls (most of which were a combination of boot sale and museum).

There seemed to be musicians on every corner, but the only tango dancers I could find were a couple very much past their prime (which I think was in 1925!). I managed to find a club where the show was free if you ate there and decided to return later. Grabbed lunch at a great little cafe and was relieved to find prices a lot 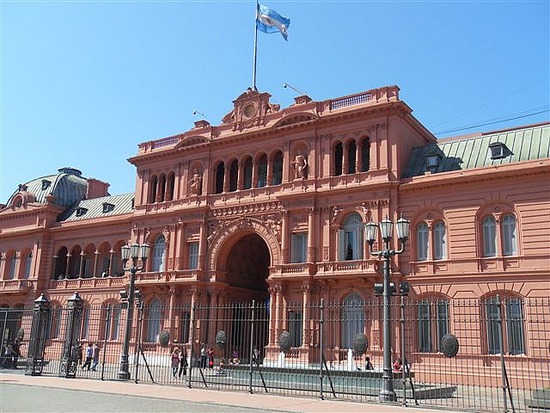 better here AND reasonable veggie food. Walking back to the hostel, I passed the Casa Rosada, the pink presidential palace (apparently they used bull’s blood to tint the paint – ew!) and stood on the very balcony where Evita appeared before her adoring public. The tango show was fun, albeit a bit cheesy, and I finished the day soaking in the atmosphere of night time BA.

I booked a “historic and cultural” walking tour the following morning, which started with a brief video of Argentina’s turbulent history. I was amused to find it omitted the little war over the Falklands, and teased our guide Nacho over how much the British had helped them out on several occasions in their history by invading or going to war with them! And they repay us with Maradona’s hand of God!

We visited the Plaza de Mayo, where every Thursday there is a very moving march by the mothers of those who “disappeared” during the harsh military regimes in the 70’s. We were also taken to one of the detention centres that had been uncovered whilst they were building the motorway to the airport. Very distressing but interesting as I remembered having watched a documentary on the subject a few years back. We headed off to the union headquarters where Evita’s body had been on view, before it was hidden by the junta, and visited the small museum dedicated to the Perons. Had a pleasant lunch outside in Plaza Dorrego and watched the female Tango champion strut her stuff – Simply Come Dancing, eat your heart out. 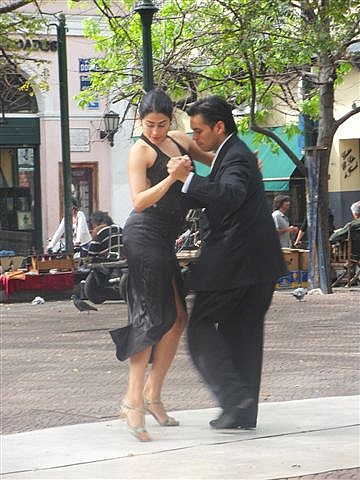 Had a very enjoyable evening getting quite merry with a couple of Aussies back at the hostel that evening, and picked up few tips for my trip to Oz (amongst other things!). One of the best days of my trip!

My good mood was dampened by the pouring rain I woke up to the following day. 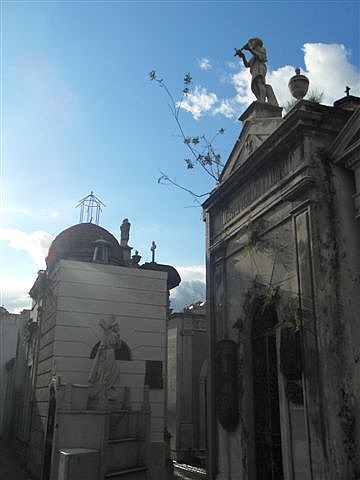 Ventured out to buy my bus ticket to my next stop in Patagonia, and had a quick glimpse of the Retiro district (where all the wealthy residents moved out to, once San Telmo became home to European immigrants and brought with them all sorts of nasty diseases). Walking around in the drizzle, it felt just like home and what with all the big old buildings and expensive shops, I could have been in Kensington!

As the weather brightened a little, I found La Recoleta Cemetery, bizarrely one of BA’s biggest tourist attractions, and Eva Peron’s final resting place after her body had been retrieved from Spain. A huge area full of enormous marble tombs and sarcophagi, it was morbid but impressive.

The next day I negotiated the city’s underground system to get over to Palermo, another fairly wealthy and trendy part of the city. I think they named it “Subte” for “subterfuge” rather than subway as it was one of the most un-user-friendly systems I’ve ever been on. Not only are there no maps (apart from one well hidden one inside each station), the stops are called different names depending on which line you’re on, with no indication of which direction you are going until you’re actually through the gate and on the platform. It does have the oldest subway trains in the world – they’re actually made of wood! 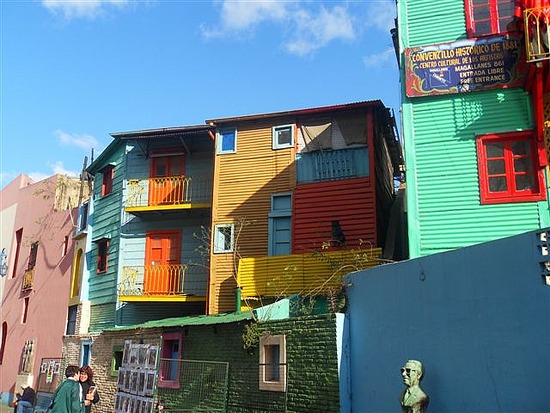 After walking around in the cold and rain I had the urge to cheer myself up with a beer and a curry. I managed to find one of the few Indian restaurants in BA, which was quite expensive, but did the job. In another life I’ve decided to come back here and open a decent Indian Restaurant called “The Argie Bhaji”!

I spent my last day shopping for a cheap pair of jeans – I finally gave in to the cold weather – and I felt I was going to need them as I headed south. I joined up with Nacho once again for another walking tour – this time exploring the different barrios of San Telmo, La Boca and the upmarket docklands area of Puerto Madero. La Boca is home to the famous football team Boca Juniors and where the first immigrants made houses out of tin, wood and whatever else was at hand and then painted them bright colours. It was now a bit of a tourist trap, with tango dancers and Maradona lookalikes plying their trade, but lively nonetheless. 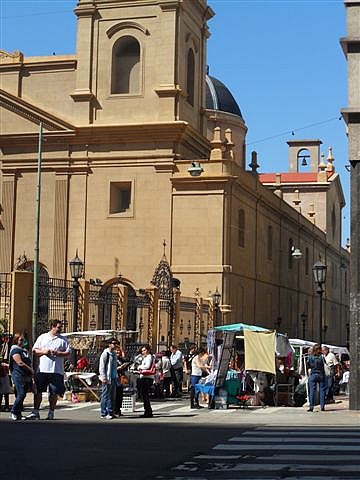 The following afternoon I set off on my 21 hour bus journey down to Bariloche in the North of Patagonia. I’d treated myself to a “super cama” bus which provides a completely flat bed with a little curtain you can pull around, seat back DVDs, plus meals and wine (OK, so it was the wine that sold it to me). Plus it looked better than most of the hostels I’d stayed in! I really enjoyed Buenos Aires and would like to return one day. It could easily have passed for Madrid or Barcelona, and was an interesting contrast from the other South American cities I had visited.