2nd – 12th October
I enjoyed my luxury overnight bus trip apart from the rude awakening by an Argentinean sniffer dog poking it’s nose in my face at 6am. I don’t think I’ve been on a bus journey yet in South America, where we haven’t had some kind of police check. You don’t get checked for drugs on the 159 to Brixton – although they’d probably have better results.

Anyhow, it was weird going to sleep as the sun set on Buenos Aires and waking up to a glorious dawn over the Andes in the heart of the Patagonian lake district.

Words can’t really describe how utterly beautiful and scenic this area is, especially as there was still some snow lingering on the mountains, and I was blessed with fine weather, so I’ve kept my descriptions short and will let the photos speak for themselves.

Bariloche is a quaint little lakeside town geared mainly towards the ski season, which had just come to an end. Set on the shores of Lake Nahuel Huapi it could have been Austria or Switzerland (along with the chocolate shops), although some parts could have been Essex! My guesthouse felt like home, and I had a comfortable warm bedroom, with use of the kitchen and lounge. There was even a full-blown vegetarian restaurant, which was a delight after weeks of omelettes, pasta and pizza.

After acclimatising myself, my first outing was by chair-lift to the top of Cerro Campanario , a local mountain where I was treated to my first birds-eye views of the surrounding scenery. The following day I set off on a 25k cycle around the Circuito Chico which took me around the peninsular, through the woods, past spectacular lakes and uphill to a mirador overlooking Puerto Blest and the upmarket Hotel Llao LLao, which was worth all the effort.  It was strange to see tulips and daffodils in bloom at the beginning of October! I made it back in one piece with a sense of achievement, and certainly slept well that night. 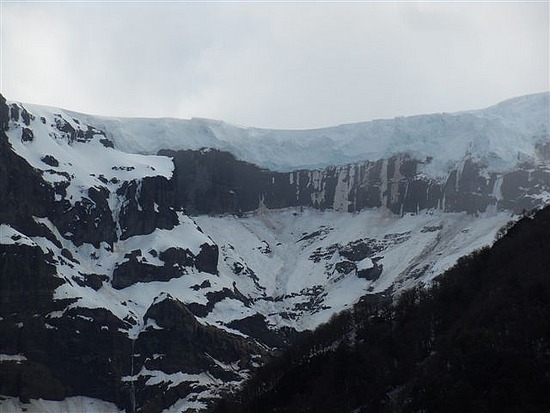 The next day I had booked a trip to Mount Tronodor which was in the middle of Nahuel Huapi National Park. After a few hours along a bumpy track with a stop at a waterfall along the way, we walked the final few hundred yards to the snowline, where we ploughed through 6 inches of snow up to the foot of the glacier. Tronodor means “thundering” and it was easy to hear why as the glacier constantly emitted loud cracks and bangs as small avalanches were set off down the mountainside. Quite scary and also pretty humbling to see the forces of nature at first hand.

Up the next morning for my journey to San Martin de Los Andes along the picturesque Seven Lakes Road.  Sadly the weather had turned drizzly and cold, so my views out of the bus windows were obscured by rain and condensation. Obviously the driver had the same problem as he managed 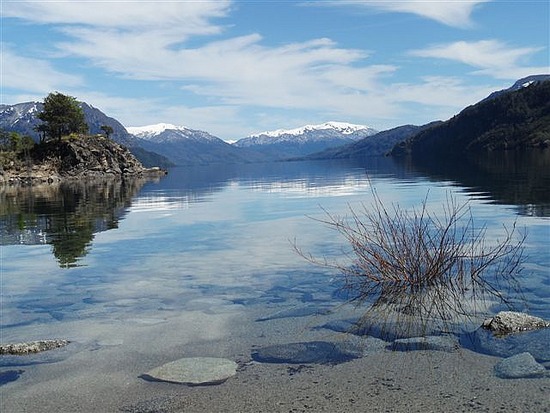 to take out a stray sheep as it was crossing the road – not a pretty sight. By the time we coasted down into town, along the shores of another mountain lake (Lacar), the sun had decided to come out and we were treated to more breathtaking views. San Martin was smaller but again, quite touristy – although being off season was very quiet. I had a 6 berth room at the hostel all to myself this time so no bunk beds for me!

After an early night, I arose to a glorious day and decided to hike up to the Mirador Bandurrias which overlooks the town.   Another half an hour or so, through verdant forests and pretty glades the track lead to the most amazing beach on the edge of the lake with crystal clear water reflecting the mountains (sorry, enough with the wordy descriptions! – see photos).. Had another one of those moments, where I felt very privileged to be in such a wonderful place and I could have sat there staring at the view forever. 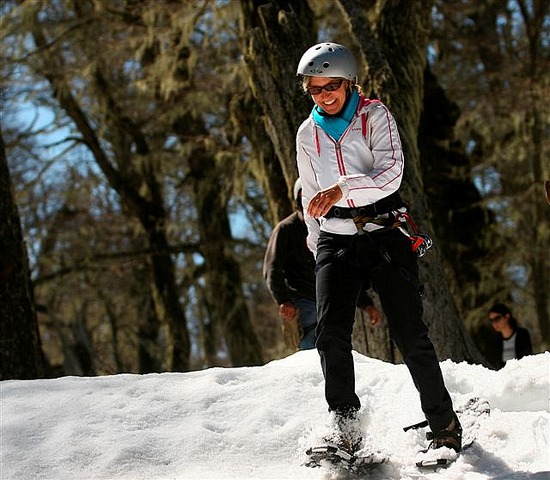 My choices for the next day were a boat ride across the lake to Quila Quina, an indigenous Mapuche settlement where there were more hiking opportunities, or an energetic packed afternoon snow-shoeing and canyoning. Being the action girl that I am, I chose the latter and oh what fun I had. We were driven up to the snowline and walked with what felt like small skis on our feet, through the forest to a frozen lake. Near the top of the mountain we sailed down on a series of long zip wires back to the cabin. A tremendous experience and great photo ops! Felt like I was on top of the world.

Back down to earth for a very early start to my next port of call on the other side of the Andes in Chile. 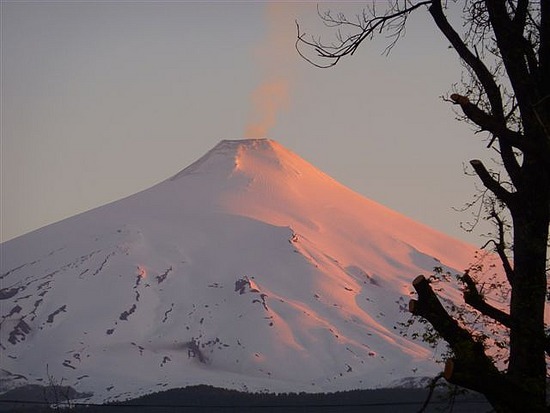 Just when I thought that the views couldn’t get much better, I arrive in Pucon, another town with an Alpine feel, but this time overlooked by a huge volcano, completely covered in snow and smoking!

I’m not quite sure why the snow doesn’t melt (answers on a postcard please), but it sure looks pretty – as long as it isn’t erupting. The last major explosion was in 1984, but Villaricca is one of the most active volcanoes in Chile, and the traffic lights denoting the risk factor outside the tourist office, weren’t too reassuring. They also test the warning siren out at noon everyday – I guess they have to hope that it doesn’t erupt at exactly that time. The local travel agent urged me to join a tour to climb it the next day – and believe it or not he made it sound so exciting, I actually considered it. If I hadn’t felt so exhausted from the amount of hiking I’d been doing, I might have gone on the 6 hour climb up (and one and a half hour “slide” down). After talking to several people who had ventured up, I felt relieved I had “declined the incline”. After a pleasant stroll around the town, I settled down on a sunny bench overlooking one of the 2 beaches with an ice cream and admired the views. Feeling happy I’d found there yet another great vegetarian restaurant with a lovely garden, I contentedly began to plan my next few days. The Huerquehue (I never did manage to pronounce it properly) National Park was a short bus ride away and the weather forecast looked good, so the following morning I set off for another long hike.

Choosing a trail which encircled three mountain top lakes I found myself walking with a couple from Brazil and a French girl. We all got along famously – Rudy and Leticia were actually on honeymoon and Juliette was here on an internship making a botanical study of the area. 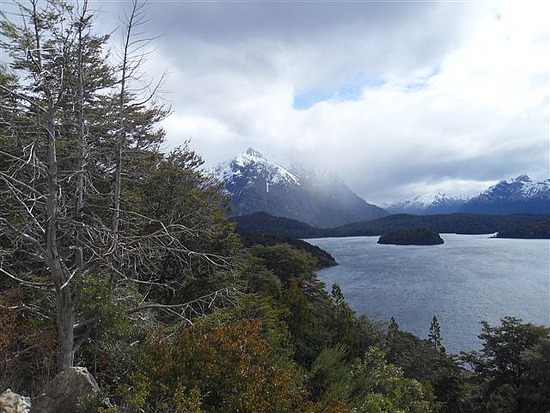 Rudy was a huge 80`s rock fan and spoke very good English, so we spent the whole day discussing Pink Floyd, Whitesnake, Led Zeppelin, Iron Maiden, Queen etc. and then we got on to films and Monty Python! Rudy had climbed the volcano and told me it was actually quite scary (and he was a Brazilian Federal cop!). I felt even more thankful I didn’t attempt it! He did show me his pictures though and it looked amazing. The park was beautiful and we climbed as high as the snow allowed. Not really equipped to climb back down in the melting, but still quite deep drifts, we decided to turn back – the intrepid Juliette carried on an actually reached the lakes.

The three of us returned back to the lower lake and spent an enjoyable couple of hours on the shore watching people kayaking and enjoying the fine weather. Arriving back in town we had a fun evening, drinking, eating and singing Queen songs! I got back to my hostel to find Eric, my host waiting on the doorstep for me. 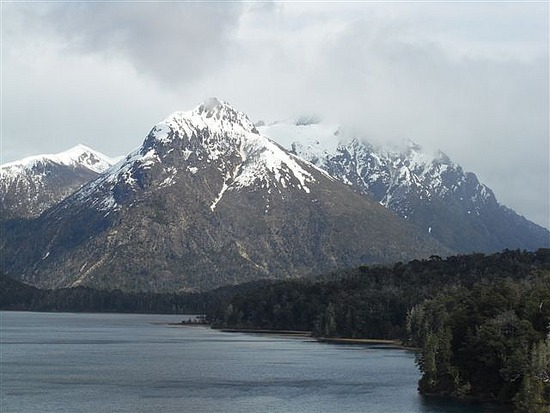 We hadn’t expected our hostel hosts to be frantic with worry about us as we hadn’t returned back with the last bus. They thought we’d got lost in the park, and Rudy and Leticia’s host had even called the police who were about to start a helicopter search for them!

Juliette joined me the next day for a wonderful horse ride through the valley (thought I’d give my feet a rest) followed by a dip in one of the many hot springs that had “sprung up” around the town. Luxuriating in a hot bath, looking up at the volcano, I again felt very lucky to be there. Said our goodbyes that night, Juliette went back to her studies and Rudy and Leticia were taking the overnight bus to Santiago. I had a quiet day ahead catching up on e-mails and errands in town, before I followed them to the capital.