Alighting from the coach in Rotorua you are immediately hit with the whiff of bad eggs. The region is one of New Zealand’s most active thermal areas – the place is full of hot geysers and you can fart to your heart’s content and blame it on the sulphur – what’s not to like?! 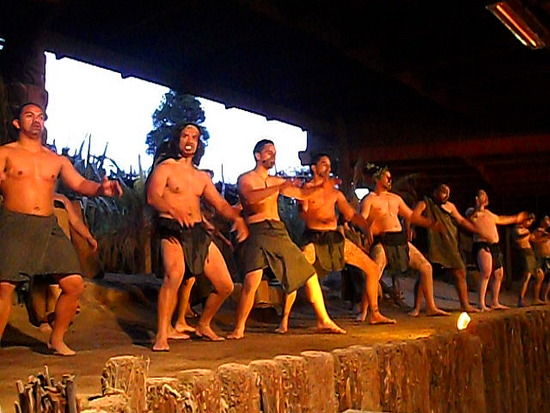 Even the lake has a section where the water reaches 42 degrees (Sulphur Bay) and you are in serious risk of getting scalded just taking a stroll. The lake is too hot to support much food for the thousands of birds (including the stunning black swans) which make it their home, but they must enjoy the temperature as it’s teaming with birdlife.

I decided to succumb to the tourist hype and booked a Maori Show that evening at the Mitae Maori Village. It was as cringe-making as I expected but enjoyable enough. To see the “Hakka” performed by a cast of dozens was impressive, and some of the “Maori warriors” were quite fit, but I really didn’t need to be constantly asked to imitate everything in Maori along with the facial expressions. Audience participation really isn’t my thing! Nor was being stuck on a dinner table full of miserable Norwegians, Swedes and Croatians, who didn’t even seem to want to speak to each other, let alone to me (I tried, I really did). It was a long evening!

The next morning I’d booked a trip to the`Wai-O-Tapu Thermal Wonderland’, one of the most famous thermal reserves. Our first stop was at the Lady Knox Geyser which erupted each day at 10.15am (with a little prompting with a bit of soap powder chucked down it!). It was pretty impressive when it got going though, and shot up around 15 – 10 metres. The park was very well arranged and the weird and wonderful landscape of bright green lakes, bubbling mud pools, multi-coloured mineral terraces and steaming hot springs was a sight to behold. I finished off the day with a walk along the lakeside, visiting the Maori village of Ohinemutu with it’s carved meeting and eating houses (a third of the population were still of Maori origin and the culture was strong here) and the steamy Kuirau Park (and very hot duck pond!).

Headed off to another lakeside town, Taupo, the next day- supposedly the adrenaline capital of New Zealand.

Having met up with Urvy and Pete (the couple I had met in the Bay of Islands), we set off for a sedate walk to the Huka Falls. We had to pass by the Bungy Jumping Centre and watched a few crazy people plunging on huge ropes into the Waikato river. I wasn’t tempted (much)! The falls were pretty formidable and I decided the jetboat was probably not a good idea either – I must be getting old. The sun was setting as we walked back past the hot springs which did look quite appealing, as people lounged in the warm water amongst the rocks. But a cold glass of wine (or two) back at the hostel won, and I enjoyed a companionable evening with my new friends.

Off again the next day (never a dull moment!) to Napier, the seaside town which had been devastated by a huge earthquake in 1931 and was entirely re-built in the in-vogue Art Deco style of the time. It had echoes of Eastbourne and Hastings, with it’s wonderful Soundshell Auditorium and Marine Parade Gardens and fountains. The town’s buildings were carefully preserved in the styles of the 1930’s, and the verandas, lamps, frescos and lead-light windows were marvellous. If only I’d packed my fringed dress and cigarette holder.

I took a long walk “Up the Bluff” which offers stunning views over the working port, and had fish and chips overlooking the bay. Walked back down through the earthquake ravaged cemetery and quaint botanical gardens (the budgerigar aviary evoked fond memories of my childhood days in Valentines Park).

Greatly enjoyed the Art Deco walking tour the next morning which highlighted the architectural styles and gave some background to the town’s unstable history around the time of the earthquake (it acquired an incredible 40 sq kilometres of land overnight, altering the whole landscape!). Just had time for a bit of hokey pokey (ice cream) before setting off once again to the National Capital of Wellington.

I had been invited by friend of a friend to spend a few days staying at their lovely house on the outskirts of the town, which proved a welcome break from hostelling. Karen, Tony and family made me feel right at home, and took me into town the next morning to explore Mount Victoria on the cable car. Again, the weather had been glorious (if more than a little breezy) and we enjoyed a coffee in the Botanical Gardens overlooking the bay, before I headed off to discover the sights of “Windy Welly” (by a not very informative hop on hop off bus). The very modern and regenerated waterfront incorporated the snazzy new “Te Papa” museum which I decided to visit the following day.

Sadly the clouds had rolled in over the bay the next morning, but I made the most of my last day by visiting the fascinating and comprehensive museum, which contained examples of Maori artefacts and houses along with offering an interesting glimpse into the history and geology of this relatively new land and it’s immigrants (along with a really cool giant squid!). Just time for a quick farewell drink with my adoptive family before jumping on the ferry over to the South Island. 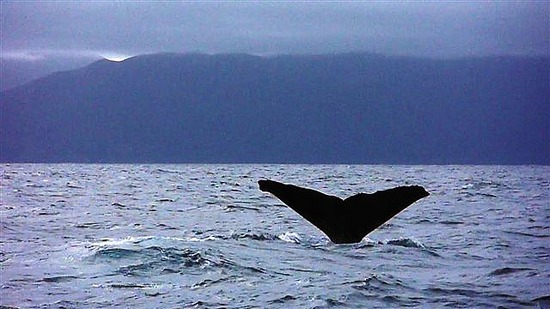 Whale of a Tail

My hostel was thankfully only a short drag of my case along the harbour in the dark, and I awoke the next morning to the sound of seagulls in the pretty, if small, coastal town of Picton. After a futile attempt to find an internet cafe. This place is soooo behind in global technology – the first country on my travels that I have had to pay to use the internet. I swear that most people here think that being “on-line” is something to do with fishing. I gave up and settled on a stroll along the waterfront watching the ferries come in. Met up with Urvy and Pete again to catch the bus to Kaikoura, where we had planned to go whale watching.

There seems to be two types of bus drivers in New Zealand, those who feel that they have to impart every last piece of information regarding the proportion of citizens who use the public transit system and how many years a particular winery has been producing a certain type of grape, and those that say bugger all (even when the bus is supposed to be a sightseeing bus – see above).

Our bus driver to Kaikoura was unfortunately one of the former and soon had us driven to our iPods in submission.   What felt like many hours (and irrelevant facts) later, we were relieved to pull into the seaside town and I was happy to discover that my hostel was literally a step away from the bus stop (my criteria in choosing hostels included “location from bus stop” as one of the most important points). “The Fish Tank” was appropriately decorated in sub aquatic styles even down to the Perspex fish encrusted loo seats, and was one of the nicest I had stayed (or should that be “swam” in). The next morning I set off for the advertised “two hour” (yes, if you were Linford Christie!) walk around the headland and took in the seal colony (one elderly seal lounging on a rock, who I think might have actually been deceased), along with some pretty impressive rock formations and amazing views along the coastline.

That afternoon, we made our way to the Whale Watching boat, trying not to get too excited – but optimistic that we would get to see at least a brief glimpse of these large mammals .

The weather had turned quite squally and we were warned that the a sea sickness alert was in place. Just thinking about it made me feel slightly moby (excuse the pun), and the fact that they kept mentioning it didn’t help.   Several choppy minutes later, we stopped just in the nick of time, with a rumoured sighting of a “spout” (just before I was actually about to “spout” myself). Several dolphins had been shadowing the boat on the way out, and the anticipation mounted as we pulled alongside the first of our huge sperm whales. The massive creature was an impressive sight and we were told to expect it to submerge at any time. Eventually the colossal tail flipped up and then slapped down on the surface, sending a cascade of water into the air as the whale dived down to the ocean depths. We were treated to a couple more similar sightings before we had to turn back to shore, against the backdrop of the snow covered mountains – a truly memorable experience.

The weather had improved by the following morning and I enjoyed a brief but picturesque walk along the beach taking in the wonderful mountain views, before catching the bus south to Christchurch.