We arrived into Christchurch to discover that someone had turned the heating “on”. It was sweltering as we wandered around the capital of the South Island admiring the cathedral, expensive souvenir shops and the ruins of the historic buildings that had crumbled in the recent earthquake. To be honest, the quake hadn’t caused the devastation I had imagined, but you could certainly notice the large amounts of scaffolding around the city, holding up, or pulling down the remnants of buildings. We walked along the riverbank to find a pub and felt glad that we weren’t spending a great deal of time in what was a pretty unmemorable city and one that seems to go to sleep at 7pm. 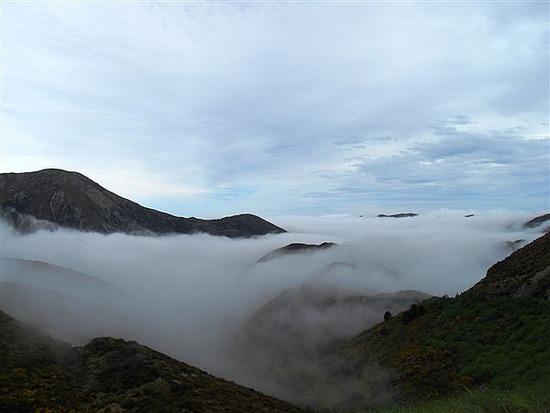 Picking up the car the next day, we felt a huge sense of freedom, and set off on the open road across the transalpine crossing through Arthur’s Pass to Greymouth. The roads became increasingly tortuous, the scenery soon became more mountainous and unfortunately the weather soon became more grey and cloudy, although the views of the mist hanging below the mountain tops were quite stunning. We arrived at our African themed (?) hostel in Greymouth just in time to watch the sun set.

Setting off early the following morning, our spirits were dampened by an over-zealous Kiwi copper with nothing better to do than give Pete a ticket for “failing to stop at a junction” despite the fact it was the back of beyond with no other cars in sight for miles. We felt tempted to speed off to our next destination to cool down, the world famous Franz Joseph Glacier, where we’d booked an afternoon guided hike. 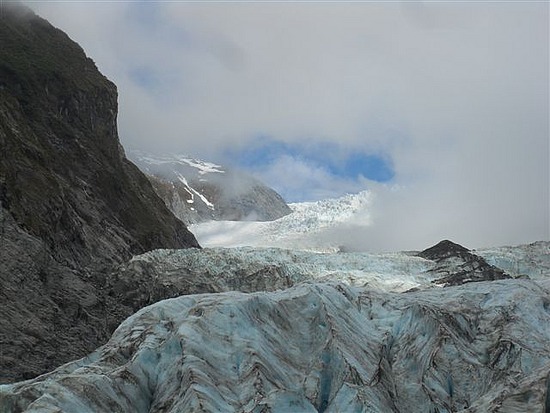 The sky had began to clear and sweltering in our “Scott of Antarctica” gear, we followed the guide to the beginning of the ice field where he literally “showed us the ropes” that we had to cling on to and gave us instructions on how to fit our crampons. The glacier looming large ahead of us was pretty daunting as we set out tentatively in a long line on the bright blue ice. Ducking in and out of the ice tunnels and climbing the steps made in the frosty surface was quite challenging but good fun and the group photo ops with the pick axe near the top certainly helped to “break the ice”.

The weather had once again deteriorated the next morning as we completed our set of glaciers with a wind and rain-swept trek to the foot of the Fox Glacier. After an overnight stop in the “adventure capital” of Queenstown (looked very much like a tourist trap) and not having the money or inclination to go bungying, skydiving, paragliding, zorbing or jet boating, we “jetted” right out the next morning in the pouring rain. 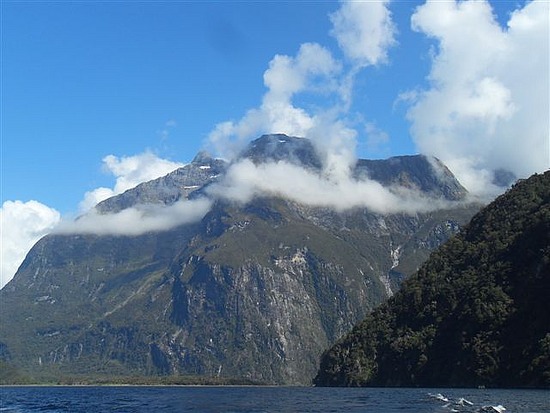 We just made it to Te Anau in time to book up for the last boat trip out of Milford Sound, and sped off to the remote but incredibly picturesque outpost of the New Zealand Fjord lands. Waiting in line to enter a very scary and long tunnel through the mountainside, we were surprised when a couple of Keas (alpine parrots – much like the Norwegian Blue, except green and very much alive) settled on a nearby road sign, just as the lights changed.

Our peaceful cruise around the sound was an unforgettable experience and we saw several seal lions along with some lovely little penguins and a couple of large waterfalls amongst the towering mountains. With the sun shining on the water, it was absolutely stunning.

Felt sad the next day as I said goodbye to Urvy and Pete as they made their way back to Christchurch for their flight to Oz. Although I’m generally happy travelling solo, it made a nice change to have some great company for a day or so. We got on really well, had a good laugh, shared some fantastic experiences, and hopefully will meet again in Brisbane at Christmas. 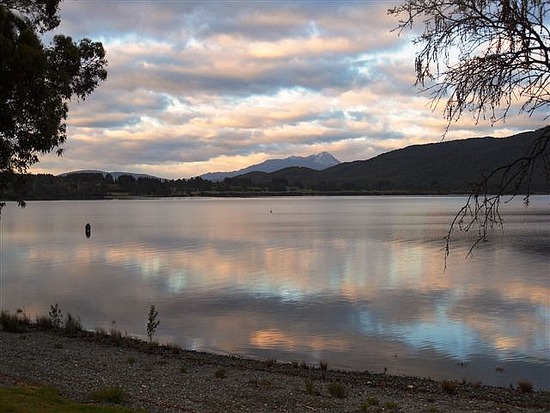 I’d decided to have an extra day in Te Anau to re-charge batteries and start planning my Australian trip, and settled into the pleasant hostel, only venturing out for a quick walk along the pretty, but blustery lake front. It was incredibly beautiful in the early morning light the next morning, as I waited for my bus further south to Invercargill. Invercargill, however, was unfortunately not incredibly beautiful – think Harlow/Crawley crossed with the South Pole! The funny thing is the town is also (like Harlow/Crawley) full of charity shops, but also seemed to have an abundance of sex shops! I’m not sure if this (or the weather) had anything to do with the fact that the town was empty by 7.30pm???

Cue another day, avoiding the cold, holed up in my hostel – which amazingly had FREE wifi! I’ve made a strange discovery… 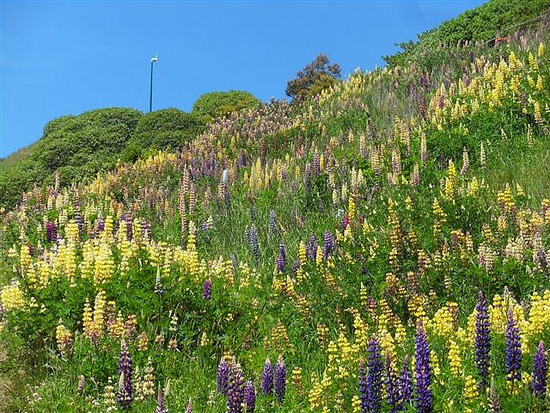 The further south you go in New Zealand the colder the weather gets and the cheaper (but slower) the internet becomes! The one interesting fact about Invercargill is that it has a large population of students. Apparently they decided to offer free college education but fund it by putting a high tax on alcohol. The students don’t realize until they finish their education, that they have actually ended up paying more for their degrees than anywhere else in the country. Classic!

Not too sad to be leaving, I had a great day travelling along the scenic south coast through the Catlins to the University town of Dunedin.  The views along the route lived up to my expectations and our driver Brian, apart from being quite informative and interesting (unlike all the other bus drivers I’d had), was a bit of a wit – and found it quite amusing that I was an “Essex girl” – I can’t believe our reputation has travelled all the way to New Zealand! Saw a couple of cute little yellow eyed penguins (the rarest in the world) and lots of sea lions (alive this time) plus some petrified trees (not sure what had scared them so). 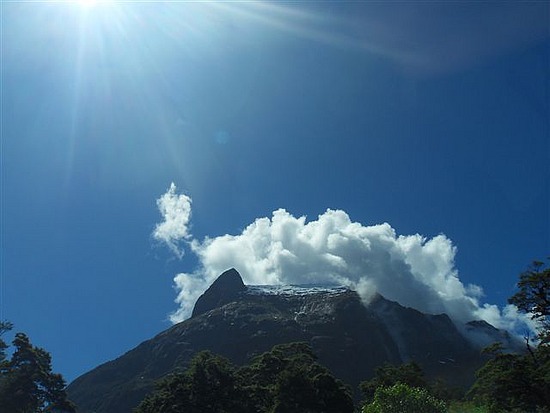 Dunedin is Gaelic for Edinburgh and it has many similarities (the weather is about the same, the architecture is pretty gothic – it even has a castle, although thankfully all the students have finished for the Christmas holidays and not a deep fried Mars bar or set of bagpipes in sight). The sun was shining the next day, so I set off by bus and foot to explore the Otago Peninsular. Cue more amazing scenery and beautiful pastoral scenes which just about made up for some very, very steep hills. I just managed to get to Larnach Castle before needing oxygen, but was rewarded with a close up view of New Zealand’s only castle and it’s magnificent gardens.

Feeling slightly recovered after lunch, I set off down the hill to the beaches on the other side of the peninsular. The man on the entry gate of the castle took pity on me (and thought I was rather mad to be walking all this way) and gave me a lift to enticingly named Sandfly Beach. 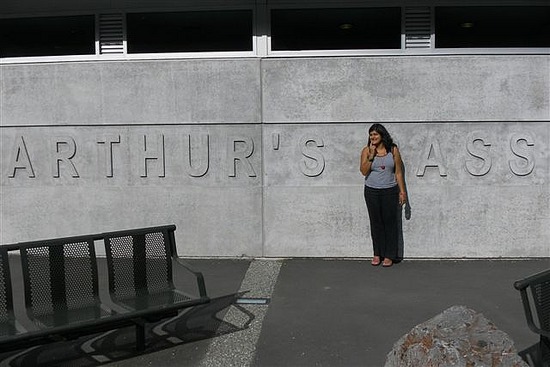 Hopping down the soaring dunes, I was treated to a glimpse of one of the most spectacular stretches of sand, and soon spotted several lounging sea lions as well as a penguin scurrying back to his nest, as I cooled my weary feet in the surf.

After a long clamber back up the dunes, I decided enough was enough, and against my better instincts decided to try my hand (or my thumb) at hitch-hiking (well, this was New Zealand – statistically the chances of being picked up by an axe-murderer must be lower, surely?). After climbing up yet another vertical road, a very kind Dutch couple took pity on me and gave me a lift back to the castle, where at least I only had a downhill hike to navigate.

On the bus back, I was saddened to hear about the second explosion and the near certain death of the miners in Greymouth. I was beginning to get a complex, after being in Chile while the miners were being released, and wondered if I had somehow been possessed by the mining Devil when I was down the pit in Bolivia. Western Australia had better watch out.