Back Up North: Punakaiki, Abel Tasman National Park, Nelson and Picton26th – 30th NovemberAfter travelling back up to Christchurch, I’d decided to hire a car for my final few days in New Zealand. I’d come to the conclusion that this seemed like the best way to gain access to most of the places I wanted to visit, as well as giving me the freedom to stop off whenever I wanted and appreciate the scenery. Risking the “limited insurance” option to cut the cost (falling asleep at the wheel after counting all the sheep seemed the most likely cause of an accident here) I set off very carefully.Plugged into my ipod, the open road beckoned and I revisited the road trip I did with Peter and Urvy through the mountains to the West Coast via Arthur’s Pass. 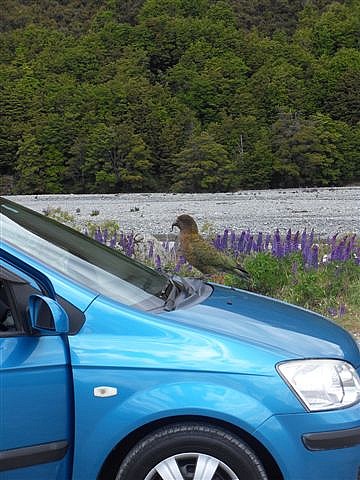 The weather was a great improvement on last time and I had fantastic clear views of the snow-capped mountains, as well as an inquisitive Kea (the alpine parrot) who tried to get into my car when I had stopped to take a photo. Tempted as I was to have some company, I think the conversation would have been a bit repetitive!I’d been recommended a hostel in Punakaiki, just north of the Pancake Rocks (the stacks of limestone were supposed to resemble great piles of pancakes – they’d obviously seen and tasted my pancakes!) and managed to find my way there in time to enjoy a walk from my lodge in the middle of the rainforest, through to the beach. Making dinner in our “greenhouse” kitchen, full of herb and flower beds (very unusual!), I certainly felt like I was in the middle of the jungle. Waken by the sounds of birdsong, I travelled further along the coast into the Abel Tasman National Park and as the sun came out, I found myself in true “Lord of the Rings” countryside amongst soaring pine clad hills. 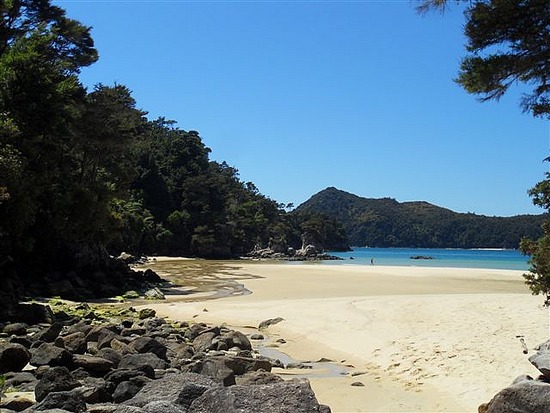 My final destination was the sedate but pretty town of Nelson, which was a hive of inactivity in the middle of a Saturday afternoon a month before Christmas! A quick aside: Although I’d thoroughly enjoyed my stay in New Zealand, I was beginning to feel that beyond the scenery, life outside of Auckland and possibly Wellington, was conducted at a pace I would find frustrating after a while. The lack of decent technology (come on, this is the 21st century!) –  limited mobile phone reception and erratic internet, is strange for a First World country and while they have embraced tourism extremely well, often the administration was lacking.Yet, the people were on the whole were extremely warm and friendly and I was impressed with how wholeheartedly the Kiwis had overcome any prejudices and racism encountered elsewhere against the indigenous population. Maori culture was embraced and celebrated (I hoped that the graffiti I witnessed everywhere proclaiming “Go Blacks” referred to the national rugby team!). 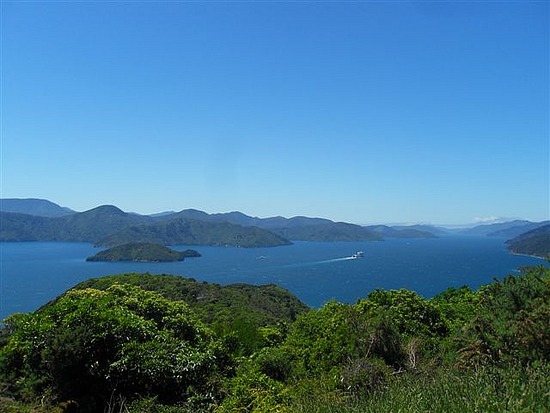 Back in Nelson, my hostel “The Coach House” was a charming old building, with splendid facilities and a lovely sunny balcony where I partook of a glass or two of chilled local wine and settled down to read my book – a little slice of heaven after a day’s driving!My plan the next day was to drive to Kaiteriteri and take the water taxi up the scenic Abel Tasman coast to Anchorage Bay, and then walk back from there. The weather was glorious and had started resembling summer at last! Setting off along the track which meandered along the coastline, I stopped off at white sand beaches, and paddled in the unbelievably clear blue seas watching the kayakers. Although my feet were aching at the end of the day, the scenery more than made up for it and I wished I had more time to spend here. 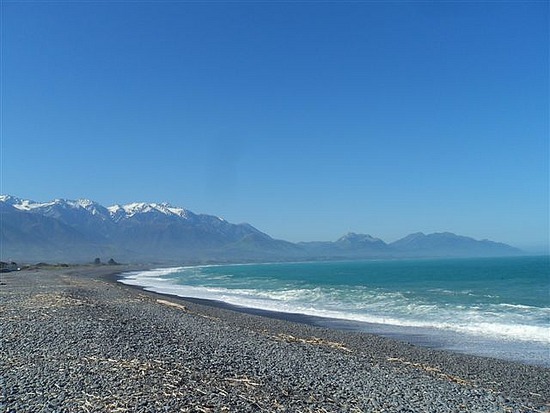 Onward and upward to Picton where I’d started my South Island adventures, for a quick trek along the Queen Charlotte Sound pathway. It had turned extremely hot by now (at least it would help me to acclimatise for the heat of Northern Australia), so despite the hilltop views, after a quick spot of life contemplating, I curtailed my walk in exchange for the air-conditioning of the car. Just when I felt I was all “sceneried out”, the drive around to Kaikoura stunned me with a truly awe-inspiring palette of bright azure seas, foaming white waves, dazzling blue skies backed by grey misty mountains.  Returning to the cozy Fish Tank Hostel in Kaikoura (where I’d previously done a bit of whale watching) felt like home. I was even welcomed back with a friendly “Hi Kathy!” – maybe I’ve been here a bit too long! Nathan, the manager explained he was looking for someone for a spot of “WOOF-ing” (I nearly took him up on his offer) …
OK, OK, before you start jumping to conclusions, it’s nothing obscene. I’d met a lot of “WOOF-ers” during my travels – it stands for Working on Organic Farms – but can mean any sort of temporary work in hostels, restaurants or bars in exchange  for free lodging. Sadly, I didn’t have time to hang around.

A quick stroll along the frankly quite uncomfortable pebbly beach (perhaps flip flops or “jandles” as they call them here, wasn’t such a good idea, especially with my sore feet) and I felt ready for a pre-dinner drink on the balcony watching the sun go down (you’re excused for thinking that this was becoming a bit of a habit). An early night in preparation for a very long day ahead – driving back to Christchurch followed by flights first to Sydney and then on to Perth – Western Australia, here I come!

Luckily the flight arrived early and I made it to my hostel (which seemed like the remotest hostel in Perth!) around midnight (or 5am New Zealand time).


Surprisingly, Perth offer several free (yes, free- Boris take note) circular bus routes around the city so I jumped on the Blue Cat to the city centre to explore. I started off alongside the river at the Swan Bell Tower, a modern structure housing the old bells from London’s St Martin’s in the Fields. Perth is a mixture of old and new with some interesting historic buildings but no more than a morning’s worth of sights. I climbed up Jacob’s ladder (a steep staircase popular with masochistic joggers) to King’s Park, an attractive garden set amongst natural bushland. It had wonderful views over the city and passed a very pleasant couple of hours.Had a quiet evening back at the hostel (well, apart from being offered another my second joint of the trip and an invitation for a bit of a tumble behind the driers – both of which I politely declined!) and moved the following day to the YHA which was slightly closer to where the tour started from. 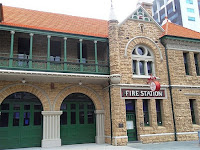 The weather looked good again, so I caught the train up the coast to the historic whaling port of Freemantle (or Freo as the Aussies call it – why does everything either get shortened here or extended with an “o” or an “a”???). After seeing my first Kookaburrah in the town square, I visited the old prison which was mainly built by British convicts in the mid 19th century and only closed in 1991. Walked along Essex Street (coincidence that it happened to be right next to the prison!) to the quite blustery foreshore for lunch and then on to The Round House, the oldest public building in WA, used as the prison before they build the main one (they seem a bit obsessed with law and order here).Had an early night washing and sorting out my stuff for the 10 day road trip up to Broome, through the Pinnacles Desert and up the West Coast. I wasn’t too sure what to expect but nothing had prepared me for the ordeal I was about to encounter! (Next instalment follows soon……)