Relieved to have arrived in Kumily (or Thekkady or Periyar depending on which sign you believed), I managed to find a lovely homestay and although a little over my budget, I decided to treat myself.

The huge Periyar Wildlife Sanctuary is supposed to contain around 40 tigers (although no-one had actually seen one for several years), along with elephants, giant squirrels, wild boar, bison, monkeys and other birds and wild species. I secured the last space on a rafting and trekking trip the next day, and then spent a fascinating evening at the local Kathikari Centre. 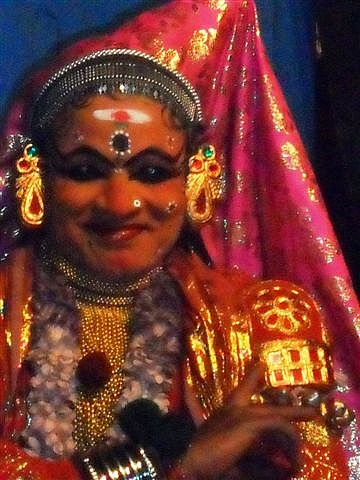 Kathikari is a four century old dance and mime art, bringing stories of gods and demons to life. We watched the complicated make-up and costume preparation routine prior to the show and then the art was explained in detail. The actual performance resembled a cross between a pantomime and mime act, and the characters (all played by men) used elaborate body and face movements (often very amusing) to relay the story with musical accompaniment.

After an early start I arrived at the Sanctuary where our rafting group were issued with very trendy, regulation anti-leech socks to wear. The early morning mist rising off the lake (artificially made by the British in 1895 when they flooded the valley, as we do) made a great photo and we were relieved to be setting off in the relatively cool part of the day. Spotting a couple of eagles along with some egrets and other water birds around the lake, the guides gave us a running commentary on the state of the elephant dung as we stepped over mounds of it. 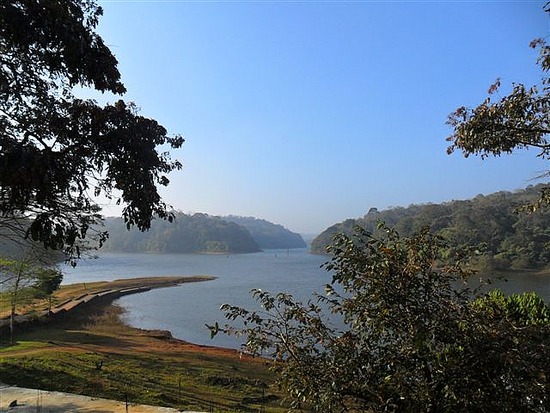 After a quick tiffin break, we took to the water on our rather haphazardly constructed rafts and handed our oars (I hadn’t really expected this to be self service!), but at least it was good exercise. Most of the wildlife we spotted was miles away on the other side of the bank and to be honest, could have been anything, but wild boar was the consensus of opinion.

Feeling optimistic that we would spot some elephants our guide took us tracking through the woods and eventually we were told to stand still and be quiet. The anticipation mounted as the lead guide, with his shotgun slung over his back, quickly climbed a tree and confirmed that there were a group of elephants in the next clearing. We all got our cameras out at the ready. What happened next was almost farcical. All the guides started shouting at us to run as fast as we could away from the forest, leading us through bushes and eventually across a stretch of bog, where we all got “bogged down” in the mud. 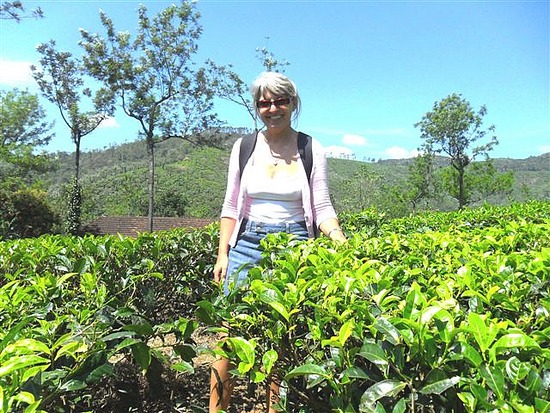 Finally we were “safe” and it was explained that they had spotted a group of bull elephants with a young elephant, who looked as though they were about to charge in our direction. Quite frankly, I still can’t see why one of the guide’s couldn’t have acted as a “decoy” and led them into our line of vision so we could have taken some photos??! But then I wondered if it had all been an act to drum up a bit of excitement for our behalf. We never did get to see a real elephant that day, which was hugely disappointing. The remaining trek (and indeed, the bowl of rice for lunch) sadly turned into a bit of an anti-climax, and I was glad to return to the cool of the hostel for a shower. I did get to see a group of monkeys being mildly obscene as I walked back though!

I’d passed by several hillside tea plantations on the journey up to Kumily, but was slightly distracted by trying to remain on the bus. 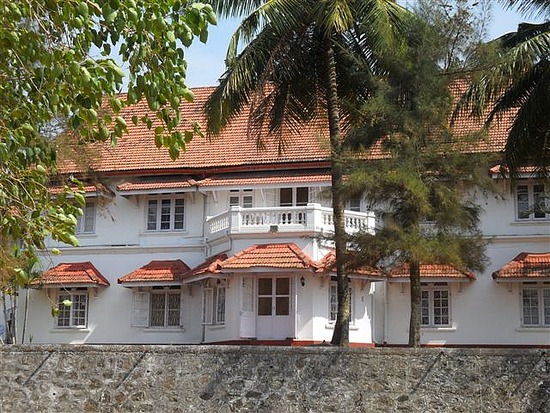 Fascinated in seeing how my second favourite beverage was produced, I braved another tuk tuk journey back along the pot holed road. I had discovered that these auto rickshaws are totally devoid of shock absorbers, and what with the absence of tarmac, the only way for a female to withstand the journey is to wear a sports bra, or as I did, cross my arms firmly across my boobs holding on to them for dear life! After a painful 15 km ride, we arrived only to find the factory closed due to it being Independence Day. The driver sensing my disappointment and his chances of a tip diminishing, offered to show me around the tea gardens himself and explained the process. The other part of my trip included a visit to a Spice Garden. Kerala really is a garden state, with so many varieties of fruit, vegetables, drinks (tea, coffee, cocoa) and almost all the spices under the sun growing plentifully here.

That evening I wandered into town to find somewhere to eat, wishing I could get a cold beer. 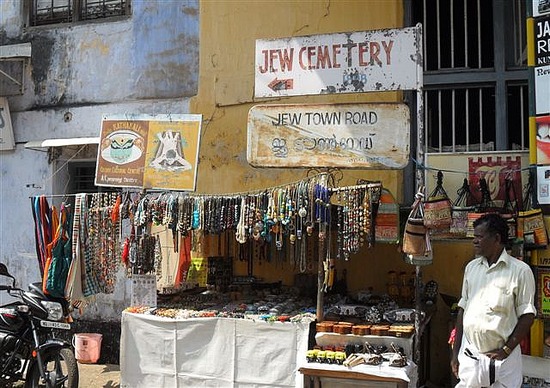 In Kerala alcohol consumption is frowned upon and only upmarket hotel bars (who have to pay a small fortune for a liquor licence) and some dodgy illegal backstreet joints serve it. Imagine my surprise when I sat down at a small local restaurant, to be offered a beer. I asked the waiter to repeat the question. Yes, he definitely said “beer”. But when he turned up a few minutes later with a teapot and mug, I began to think that something had been lost in translation. The waiter saw my puzzled and disappointed expression, and explained that this was “special tea” and finally the rupee dropped. Pouring myself a nice cold cup of frothy “tea” I couldn’t wipe the smile off my face. This is the funny, eccentric side of India that I love.

Dreading the 6 hour bus journey the next morning to the old Port of Cochin, I came prepared, but it was not nearly as bad as the last, although the return trip along the bendy mountain roads did make the poor lady next to me quite ill. We were pulled over by the police at one stage, and when I asked why, expecting it to be for speeding or dangerous driving, I could have sworn they said it was because the driver and conductor weren’t wearing their uniforms! Nothing would surprise me here. 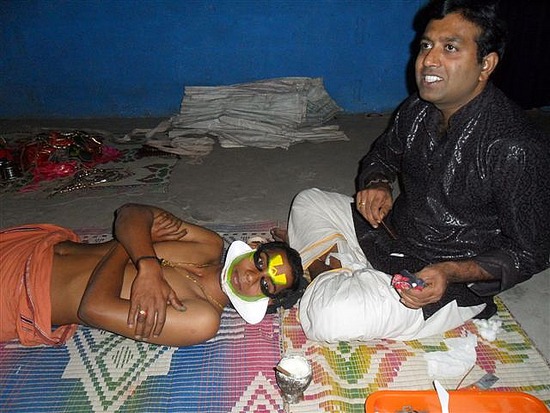 We were pulled over by the police at one stage, and when I asked why, expecting it to be for speeding or dangerous driving, I could have sworn they said it was because the driver and conductor weren’t wearing their uniforms! Nothing would surprise me here.

After being turfed off the bus in Cochin (at a petrol station, of course!), I managed to find a rickshaw to take me over onto the reclaimed peninsular of Fort Cochin (where I had been recommended to stay).

“Kochi” is made up of a series of islands and peninsulas joined by bridges or ferries, and the old trading post and Colonial settlement of Fort Cochin seemed a little less manic than the traffic clogged roads of mainland Ernakulam. I took a quick wander around the narrow streets, which seemed to be full of shops selling souvenirs and clothes. This was obviously where the tourists stayed. 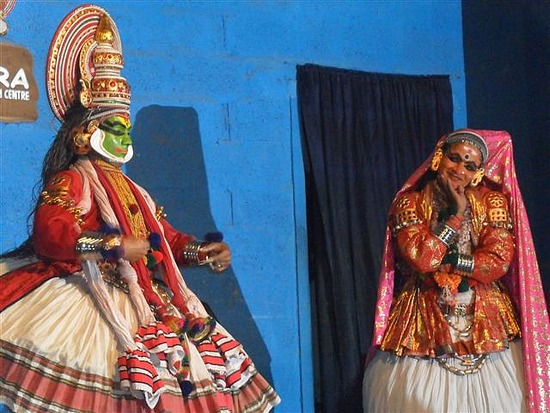 It was also the preferred haunt of one of the original “tourists”, Vasco De Gama, (unfortunately his house, which is now a hotel, was fully booked). Apart from the incongruous European traders houses that still dominate the waterfront, the main sights seemed to be St Francis’s Church (the oldest European church in India), the Portuguese built Mattancherry Palace (I’d seen better) and the Pardesi Synagogue set amongst the crowded lanes of Jew Town. Unfortunately I wasn’t in the market for spices, antiques or souvenirs just yet (may be tempted near the end of my trip) so the constant “hard-sell” began to wear me down after a while. So, making Fort Cochin my base for a couple of days, I took advantage of the wide selection of hip cafes, and probably put on another kilo or two!

On my final night I decided to join the families and youngsters taking a stroll along the seafront promenade with it’s fish market and fine views of the Chinese cantilever fishing nets prominent all over Kerala. 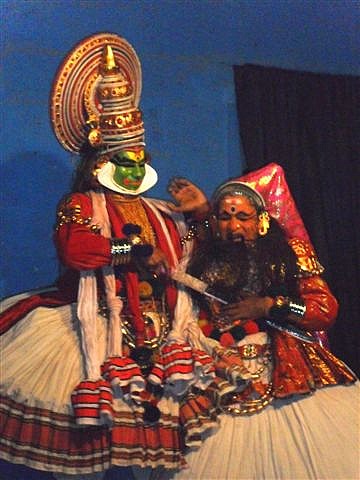 A relaxing and enjoyable end to my travels in Kerala, before my flight over to the neighbouring state of Tamil Nadu, to meet up with my good old friends Mo and Ernesto.

The tourist board had named the State “God’s Own Country” (which “god” exactly is unclear, as the state comprises mainly of Hindus, Catholics and Muslims). Kerala was certainly easy on the eye, swathed in vivid green tea plantations and coconut groves and home to thousands of species of exotic birds and wildlife – a veritable “Garden of Eden”. The backwaters and beaches are stunning. The history and culture are fascinating. What is less than “heavenly” however is that this beauty is all too often marred by the pollution and rubbish that is liberally strewn everywhere. It is a very sad sight and I left hoping that this problem is addressed before it’s too late.