Flew into JFK and felt a sense of excitement and relief at being back in a country where I felt at home. This feeling rapidly turned to frustration when I was stuck waiting for an hour and a half in the mile-long immigration queue – “Welcome to America”.  Why is it that the check in procedure here in the States has become so easy and seamless, but it still takes hours to process you through security and immigration??. At least they let me back in, and my bag (which had made it through much sooner than I had), was waiting for me in baggage reclaim. I took the shuttle to a nearby hotel in a very dodgy area of Queens, but it felt like luxury! I had a big king-size bed to myself, a coffee maker, hot shower and cable TV! 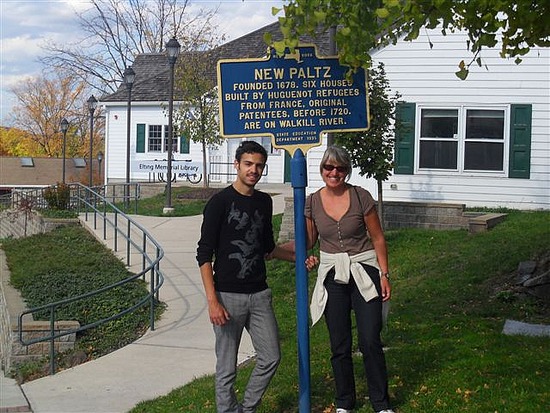 Me and My Boy

I woke slightly confused the next morning, and greeted the maid with a friendly “Ola!”. Luckily, she appeared to be Spanish anyway and replied with a bemused “Hi!”. I had thought all my language barrier problems were over for a while, but I hadn’t bargained for the New York snarl….

Made the most of the breakfast of oatmeal, waffles, orange juice, yoghurt and coffee, before heading off to pick up my car. The drive up to New Paltz, where Joe was at uni, was beautiful once I got out of the city. The colours of the leaves against the brilliant blue sky still took me by surprise, even though I was looking forward to the famous fall views.

The drive took around 2 hours and I arrived on campus around lunchtime, to see Joe walking back to his halls (from where, I never asked!) behind me in the rear-view mirror. It was lovely to see him again, and I realised how much I’d missed him. He showed me his room, which he shared with a Japanese boy, and which looked very much like his room at Kingston – you still couldn’t see the floor. We had lunch at the college canteen which was like a giant food court – although as Joe warned, the food sadly looked better than it tasted. 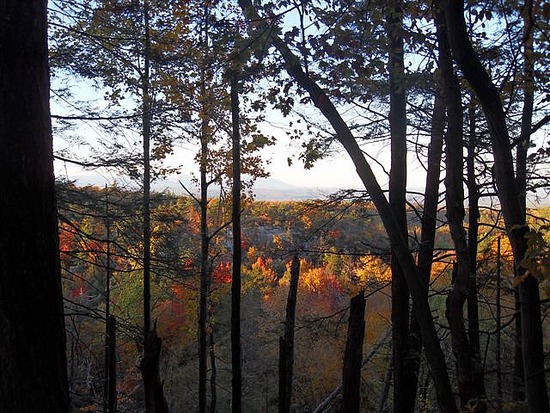 The town of New Paltz is on the tourist trail between New York and New England, and being such a short drive away from Manhattan was full of day trippers on this sunny Sunday. It was charming though, with lots of little craft shops and cafes, overlooked by wonderfully scenic countryside. It was coming up to Halloween, and all the stores and houses were decorated to the hilt – some even had full scale graveyards in the front gardens! Once I’d checked into my hostel, we took a drive up to the nearby National Park, to see the waterfall, and watch the sunset (one of many pretty spectacular sunsets I’d seen on this trip) over the hillside. 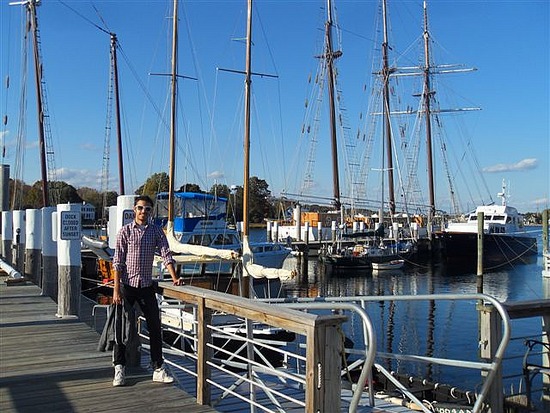 
Joe had lectures most of the following day, so I borrowed a bike from campus, and cycled along the Walkill Valley Rail trail, which followed a disused railway track to the nearby village of Gardiner. I don’t think my bottom had quite recovered from the long ride I did in Patagonia, and the return journey became quite painful. I stuck to my healthy new exercise/diet regime, with a pizza that evening (it is SO hard not to eat here, there’s so much food) and a good catch up with Joe.

Joe had a couple of days free, and was desperate to get off campus, so we hit the road to Mystic on the Connecticut coast the next morning, passing by the towns of Brentwood and nearby county of Essex….It all felt strangely familiar, but much more attractive than the British counterparts. If only they played some decent British (or American come to that) music on the radio (and no ads), it would have been perfect. 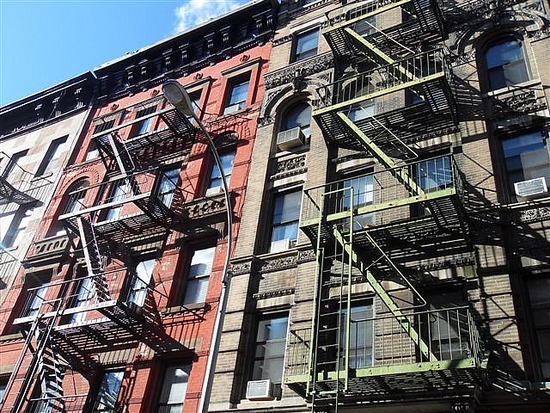 The weather held out and we had a huge plate of fish and chips in the pretty harbour side town and took the obligatory photo outside of the “Mystic Pizza” shop (we couldn’t face another pizza). Watched another stunning sunset over the bay in the nearby typically “New English” town of Stonington.

We decided to head back to New Paltz the scenic way the following day, and passed through tiny villages and homesteads, all dressed up for the Halloween weekend. It is strange how this part of the country has a reputation for being a bit “Christian Right”, yet seems to embrace this festival of the occult so avidly! Again the scenery was awesome (help, I’ve been here too long).

Once back, we tried out the local Thai before turning in to get a good night’s sleep in preparation for our weekend in the Big Apple.

My sat nav let me down the next day when he got us on the route into central Manhattan, instead of back to the airport . 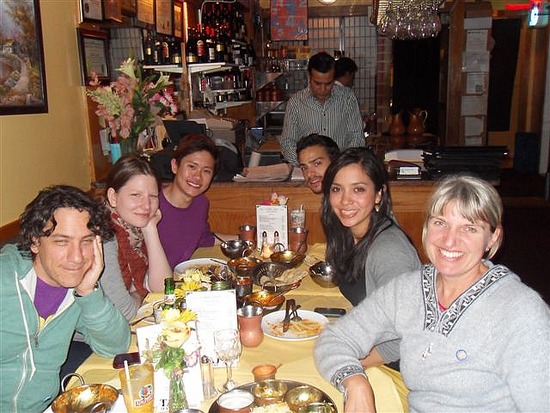 One huge traffic jam out of the city later, we dropped the car back at JFK and headed into town to meet up with Alfonso and Bruce (jump back several blogs to Costa Rica when I met Trish, a lovely lady from Washington who had very kindly offered us the use of her brother’s apartment in Chelsea). The studio flat was very bijou but comfortable and in a great neighbourhood and immediately felt like home. Our hosts were driving upstate to their farm for the weekend, so very trustingly handed over the keys and we arranged to have a drink and a proper chat when they returned on Sunday.

Joe and I had no firm plans, and having visited New York before we’d done the main tourist attractions. We went on an interesting free walking tour of Greenwich Village the next day, which took us around this bohemian, historic neighbourhood, explaining the sights. Also in our neighbourhood was the English Food Shop “Tea and Sympathy” where Joe stocked up on Marmite, and I treated myself to a bottle of Daddies Sauce (I had embarrassed Joe on Facebook by exclaiming how much I had missed my “Daddies Sauce” and he had to quickly explain to all his American friends that it was in fact A CONDIMENT!). 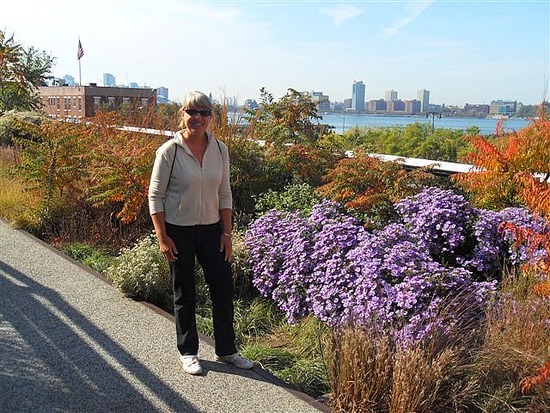 That evening I’d arranged to meet up with some of my colleagues from the San Fran office who had set up in New York. It was lovely to see them again and catch up on all their news. They took us to this great bar in the Flatiron district called Spin, which consisted of dozens of table tennis tables. Needless to say things got quite chaotic after a few drinks (but I was still terrible!). We ended up having a fairly decent Indian in “Curry Hill”, and promised to keep in touch.

The next morning we tried (but failed miserably) to get up early to go to the half price ticket booth to see if we could get some tickets for a Broadway show. We ended up on the wrong side of the Brooklyn Bridge, but enjoyed the views of the city as we walked back across. Sadly, all the shows were way over our budget, so we cheered ourselves up with another mammoth meal in China Town. My clothes were definitely beginning to feel a bit tight! The afternoon was spent exploring the streets of the East Village, which completely wore Joe out, and he refused to hit the town with me that evening – wuss! His old mum wasn’t going to let a Saturday night in Manhattan go to waste and took the subway up to 42nd Street where I managed to get standing tickets for “Memphis” , one of Broadways hot new shows. It was great and I walked back down 5th Avenue soaking in the sights and sounds of this exhilarating city. 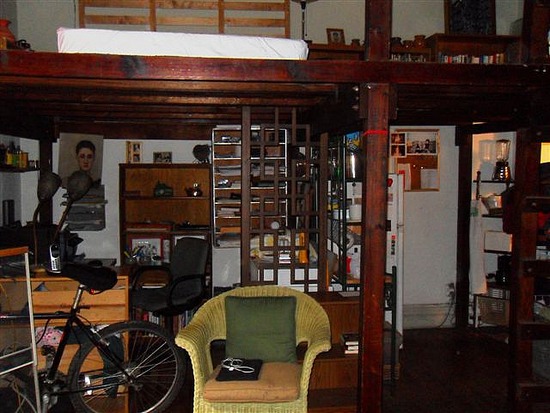 
Sunday was our last day together, but the sun was out and after a hefty but delicious brunch, we went for a walk along the “High Line” an unusual new park that had been created on the disused lines of the elevated freight line that used to run the length of the Lower West Side. It was brilliantly landscaped and included art installations and some great views of the Hudson. We sat and watched the musicians and strange cabaret acts performing in Washington Square, before I had to wave Joe off at the bus station. I tried not to think about the 7 long months before I’d see my baby again – still at least we have Skype.

That evening, I enjoyed getting to know Bruce and Alfonso a little better over a bottle of wine and a pizza. What a charming and very generous couple – I hoped they would take me up on my offer to come visit me in London when I get back (at this rate I’m going to need a bigger house!). I really do feel that one of the most rewarding things about travelling is the wonderful and interesting people I have met along the way.

Snuck out very early the next day to catch the train to the airport for the next part of my Stateside re-visit – back “home” to San Francisco.

A Tale of Three Cities 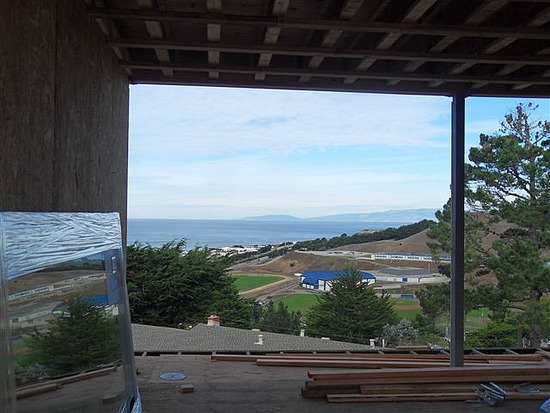 It did feel strange taking the train back into the city I had called home for 3 months. I felt like a real local, helping out some new arrivals buy their BART tickets at the station.

My friend Tash met me at the station, and after lunch we settled down for a lazy afternoon in her apartment in the Mission. The next few days comprised of eating, drinking and meeting up with friends and colleagues, catching up on e-mails and trying to plan the next part of my trip in New Zealand.

I was blessed again with good weather, and enjoyed a pleasant morning with my old mate Steve, who had just started building a house in Pacifica (around 20 minutes outside of the city) when I left in June . I was dying to see how it was progressing, and was impressed! He hopes to have it finished early in the New Year, but you could tell that it was going to be spectacular with amazing views of the coast. He seemed in good spirits as his baseball team, The Giants had just qualified for the World Series (in fact the whole of San Francisco seemed to be caught up in the hysteria) AND West Ham had come back from the dead in the Carling Cup to beat Stoke 3-1. And his windows had just arrived! Can’t wait to come back one day and see it finished. 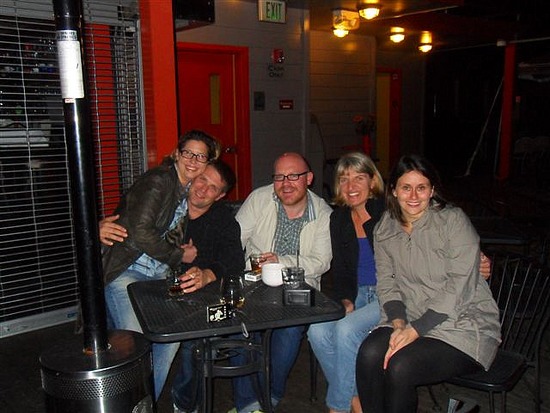 Refreshed and happy after spending a few days in familiar territory with some old friends, I headed off to the airport once again for a shuttle down to LA, and my long flight across the Pacific to New Zealand.

Councillor David Tee on October 29, 2010
As the new mayor of Brentwood I would just like to say that Old Brentwood in Old England is just as nice as anything you will find anywhere else in the world Ms Gardner.

Pat on November 02, 2010
Fantastic blog entry – love this one and bet you were made up to see Joe again – hope you are staying safe and having a wonderful time.
xx