Managed a few hours of restless sleep on the long flight from Los Angeles to Auckland, despite the screaming brat in the row next to me, and the fact that I’d gotten used to a bit more leg room on those South American buses. At least the thought of a 13 hour flight doesn’t faze me at all any more, now I’ve done a few 24 hour bus journeys. It was weird taking off on Thursday evening and landing on Saturday morning having crossed the International Date Line. I had lost a whole day and this time without any alcohol being involved!

After a quick nap, I dragged myself out to see the sights of downtown Auckland and found myself in the middle of the Diwali celebrations. 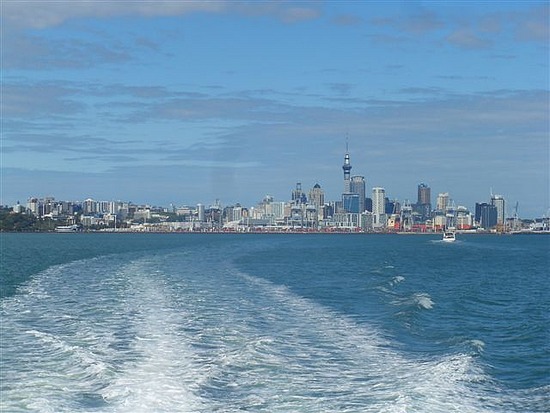 Auckland from the Harbour

I was in heaven – a whole street full of Indian food stalls, and some great Bollywood dancing and music on the stage. Continuing to get my bearings I wandered down to the historic old harbour, stocked up at the supermarket (decided I could give “Sheep World” a miss – I wonder if they have a “Big Dipper”??) and as the jetlag kicked in, settled down to an early night.

After a good rest, I awoke the next morning to glorious sunshine and took the ferry over to Waiheke Island in the Bay, which is known as the “Wine Island” (I felt strangely drawn), after the number of vineyards that take advantage of it’s perfect climate. Rather than go on an organized tour I visited a couple of wineries and explored this pretty island by bus and by foot. Had lunch on the most incredible white sand beach– it really is beautiful here – clean, safe, the people are really friendly – a bit like the UK used to be! 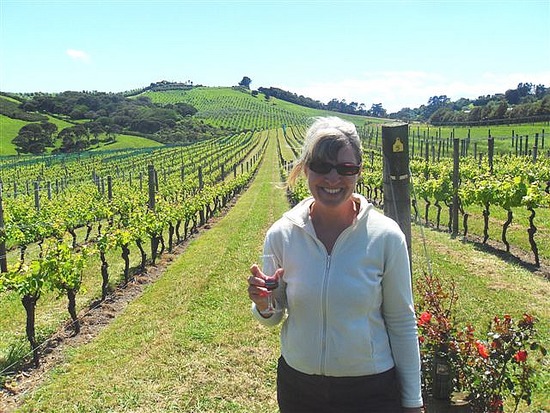 OK…Just one more glass then….

The wine was pretty good too – any place that has a wine called “Shag Rock” is alright by me!

Sobered up with a stroll along Blackpool Beach (not a Big One or “Kiss Me Quick” hat in sight), I caught the ferry back into town and had a leisurely wander along the harbour where a large memorial reminded me that this was where the Rainbow Warrior was sabotaged back in the 80s. Arrived back just in time to catch the fireworks signaling the end of the Indian Festivities and sadly almost the end of my stay in New Zealand’s largest city.

For my final day I decided to go on my own little Auckland Marathon (inspired by the real thing which had taken place the day before) and set off on a 16km “Coast to Coast” walk, which passed by Mount Eden and One Tree Hill. The place names told me that this wasn’t going to be a stroll in the park and I had a feeling that my poor old feet would never forgive me. 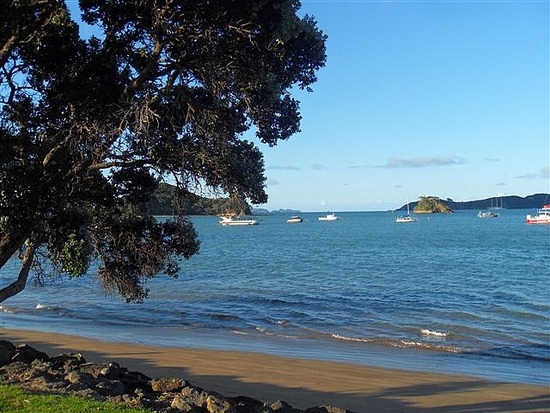 I was however rewarded with great views over the city from these two extinct volcanoes, and caught an interesting insight into the different neighbourhoods and distinctive old houses and gardens which make up the suburbs.

As I boarded my bus the next morning to Paihai, the gateway to the Bay of Islands, I felt excited to be making the journey to the far north of the island.

The small seaside town was a real contrast from the vast metropolis I had just left, and as I took in the views from the promenade, I started planning my next few days. The nearby site of Waitangi was where the treaty was signed between the Maoris and the British establishing British Sovereignty in New Zealand, and there were traces of colonial history all around the area – from Captain Cook’s landing site just off Roberton Island, to the historic town of Russell across the bay, once known as “the Hellhole of the Pacific” when used as a stop off point by the whaling ships. 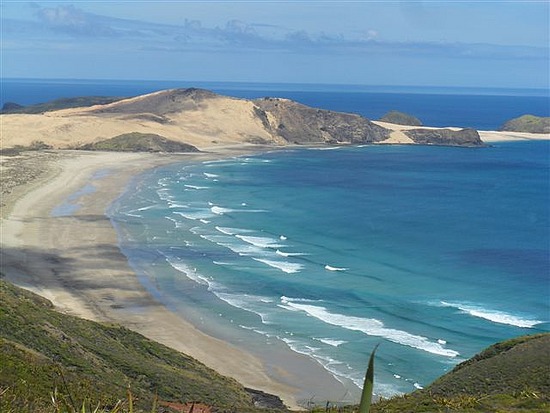 I woke early the next morning for my first trip which took me the very northernmost point of the island, Cape Reinga. We stopped off at the Kauri Forest – one of New Zealand`s oldest and largest trees. Bizarrely these trees are actually “mined” – the value of their wood is so high that they are excavated from underground (where they have lain for thousands of years) for the furniture industry.

The Cape is where the Tasman Sea and the Pacific Ocean meet and is truly spectacular. It is believed that this is the place where Maori spirits depart the earth when they die and I have to admit, it really did feel quite “spiritual” – I had another “moment”! We had great fun sand boarding down the huge dunes that form the beginning of “90 Mile Beach”  and then proceeded to drive the length of this desert coast. A stop off for “fush and chups” overlooking Mangonui Harbour rounded off the day perfectly. 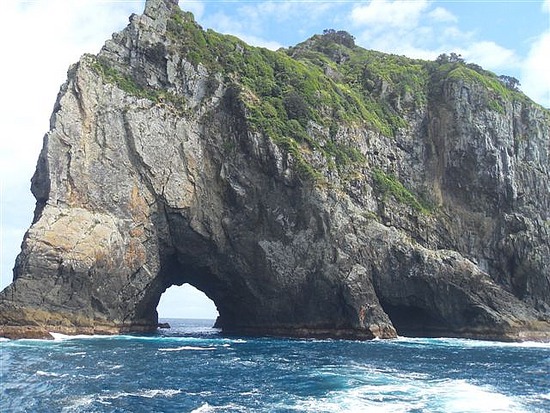 The Rock with the hole in it

The following morning I took to the water with a dolphin watching cruise around the bay followed by a trip to Cape Brett and Motukokako (Hole in the Rock to you and me). Apparently the chances of seeing dolphins was more than 90%, but the chances of the boat being able to get through the hole were significantly less than Susan Boyle being able to get into the Playboy Mansion. Either one would have been a bonus, but luckily we managed to do both. We had only just set off before Flipper and his missus started following the boat, but we’d been told there was a whole pod just ahead of us (I assumed they didn’t mean peas). Passing by Roberton Island (Captain Cook, Endeavor, blah blah), we sighted them and they gracefully darted back and forth under us, as we all rushed from one side of the boat to the other trying to spot them, like a bunch of demented lemmings.

Once we reached the rock shaped like a giant polo mint, we were treated to the sight of hundreds of sea birds – when we got up closer, we saw there was a huge shoal of fish just under the water. 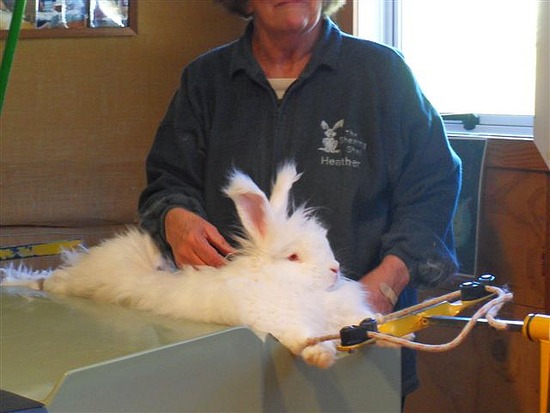 OK It WAS me that stole Mr McGregor’s Carrots

If that wasn’t enough excitement for one day, the skipper decided he was going to try and make it through the hole, even though the clearance was minimal. We raced through the small tunnel and out the other side like a rat through a drainpipe – very exhilarating. Stops at picturesque Otehei Bay and then Russell for lunch, calmed us down and I arrived back in Paihia just in time to catch my bus back to Auckland.

Up early again the next morning for my early bus to Waitomo – home of the famous glowworm caves. We were dropped off outside the caves and went on a short, but fascinating tour through the underground caverns that provide the perfect conditions for the millions of glowworms that make them their home.

Their life cycle consists of the female laying around 120 eggs, but only around 20 survive (the rest are eaten by their siblings – nice..) 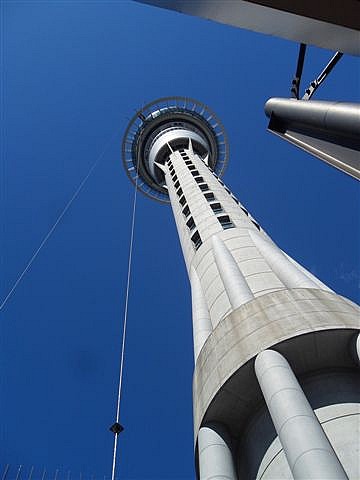 The larvae build a nest and then lay down sticky lines a bit like spider’s webs to catch insects to eat. Over the next 9 months the larvae grow (and glow!) until they finally pupate and eventually hatch into an adult. This is where it all goes horribly wrong – the good news is that their only function is to reproduce (usually the male is waiting for the female to emerge from the pupa – sounds familiar!) but the bad news is they have no mouth, so only survive a few days. Still, no parental responsibility, or “glowing” old gracefully, I guess!

With very little else to do in Waitomo apart from activities involving the caves (and lots of money – black water rafting, climbing etc.), I was beginning to envy the glowworms, but after a quick look in the local guide book, I witnessed one of the funniest and strangest sights I’d seen on all my travels so far.

Just down the road from my hostel, I noticed a sign advertising “The Shearing Shed”. 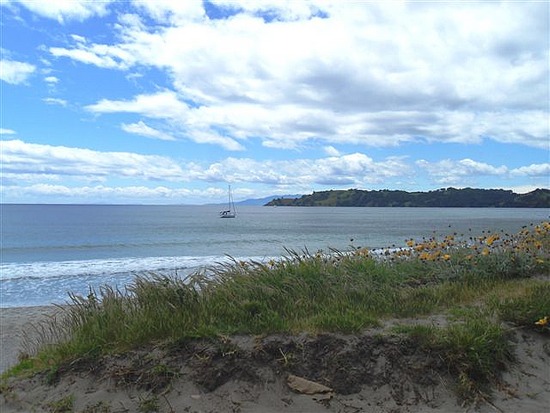 Thinking it was something to do with sheep, I’d not really taken much notice, but on closer inspection it appeared to be where big white fluffy Angora rabbits were bred and sheared for an audience. They claim to be approved by the SPCA, and without being sheared the rabbits would overheat and die, so I felt morally obliged to go and check it out. I began to have my doubts when poor “Flopsy” was tied to what looked like a torture chamber rack (to stop him wriggling) while being shaved by a lady who looked to be enjoying it a bit too much. Fortunately our big eared friend lived to see another carrot, and by all accounts was much relieved to be rid of his heavy coat (unlike the tourists who were much relieved of their money in the “knitted goods” shop on the way out).

After a token hike up a nearby hill, I spent the rest of the afternoon on the internet planning the next few days of my stay in the North Island. Next stop….Rotarua.