Kerala, India (Pt 1 Kovalam and the Backwaters)18th – 24th JanuaryAfter my last flight with Tiger Airways, I had expected the worst on my onward flight from Singapore (from Perth) to Trivandrum in the Southernmost Indian state of Kerala. I was pleasantly surprised – no long queues for check in, the flight left 5 minutes early and I was given an emergency exit seat. After the stewardess helpfully (and rather worryingly) explained to me that I would have to open the door and manage the escape shute in case of an emergency, I settled down to enjoy the 4 hour flight, with the luxury of 2 spare seats next to me.

Arriving into the seaside resort of Kovalam after dark, I lugged my rucksack past a long promenade of shops and restaurants, alongside a beach full of moonlit fishing boats and crashing waves. The next morning I awoke to have breakfast overlooking this picturesque scene and marvelled at the huge lighthouse and a million palm trees that dominated the tourist town.The day was spent acclimatising to the humidity and sorting out yet another mobile phone to use in India (a new phone was cheaper than topping up my Australian phone!), buying plug adapters (Indian plug sockets have 5 pins like ours, but still the plug always seems to fall out of the wall), containing my ecstasy at finding a jar of proper English Marmite in the local supermarket for a quid, and waiting for the power cut (one of many) to end, so I could check my e-mails. 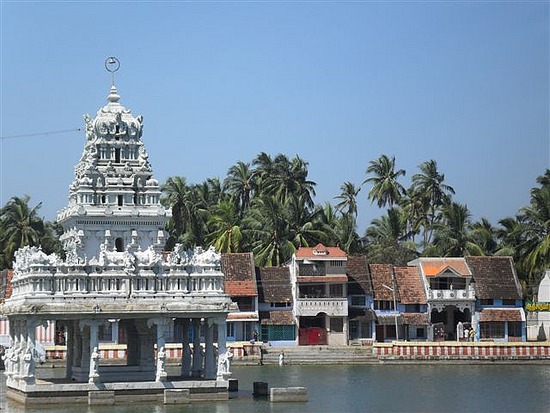 Having visited India many years ago, I kind of knew what to expect, but the culture shock was still quite startling, after spending several months in the US, New Zealand and Australia. The heat, the dirt and the poverty is always shocking and I was instantly on my guard in fear of being constantly ripped off and I switched into full blown “haggling” mode as soon as I arrived. I guess it’s just how things are done here. But despite the hassle, the majority of people are very friendly and the prices are still so inexpensive compared to Australia. Kerala must host the world record for vegetarian restaurants – and finally I managed to find really good curries, mostly for less than a pound each! I could tell I would need to seriously watch my weight here (maybe a dose of dysentery by the end of my trip would help, or perhaps I’d have to invest in a cover-all sari!). 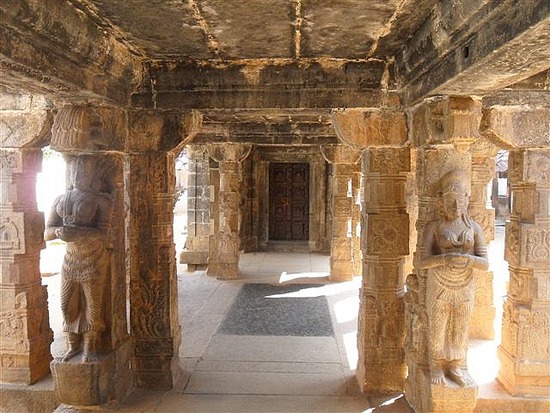 Without any real plans for a change – I hadn’t really spent much time researching India – and without my trusty Lonely Planet book, I felt a bit lost and lonely and was missing Mark. After exploring the town, feeling slightly uncomfortable sunbathing on the beach and getting battered by the powerful waves, I pulled myself together and booked a day trip to Kanyakumari, the southernmost tip of peninsular India by private car (I didn’t feel brave enough to sample the local buses just yet).The persistent attention of the driver wore me down a little, but I enjoyed watching the paddy fields and banana plantations sail by despite experiencing some of the worst drivers that India has to offer (mine being one of them!). Other than overlooking the meeting point of the Indian Ocean, the Bay of Bengal and the Arabian Sea, the town itself was pretty uninteresting, but we visited the Suchindran Temple on the way and on the return, the wonderful ancient palace of Padmanabhapuram (try saying that in a hurry!). 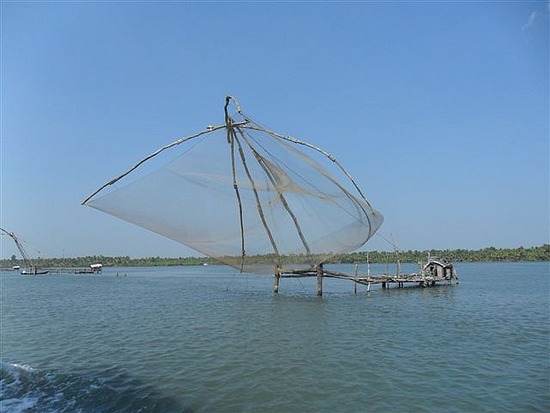 Being the lone tourist at the site, I was mobbed like a film star by a sweet bunch of school kids wanting to practise their English.The following day I decided to pack up and move on to Kollam, which was a gateway town to the famous backwaters that cover the western coastlands of the state. I’d heard glowing reports of the cliff top resort of Varkala from fellow travellers, so asked the driver to stop off there for lunch. The stunning location, perched above a palm fringed beach, coupled with the cosmopolitan cafes and laid back atmosphere, made me regret not planning longer in this hippy hang out. I vowed to return one day and sample some yoga classes and try out an ayurvedic massage.Finding Kollam to be just another big bustling city, I checked into a hotel and walked down to the beach for a dip. Unfortunately, like most beaches in Kerala, there were signs warning against bathing all along the beach. Asking a couple of friendly young Indian girls to watch my bags and my back, I braved going in up to my knees, only to be swept off my feet by the strong current and swirling waves. They weren’t kidding! Feeling even more hot and sticky than before (and now very sandy), I blagged my way into swimming pool of the town’s only 5* hotel and cooled off with a relaxing swim. 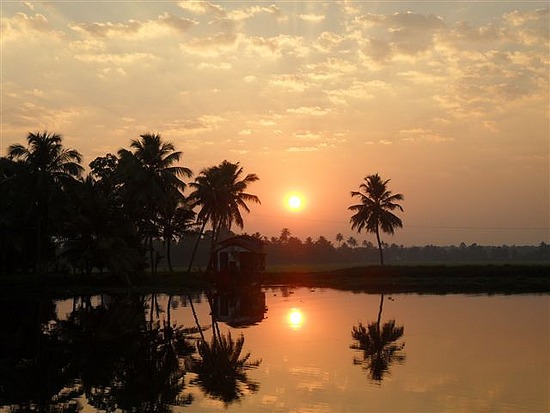 That evening as I went out to dinner, I found myself surrounded by a Catholic Saints Day Parade, along with firecrackers and piped music. And later that night from my hotel window, I had a front row seat for the impressive firework display.I’d decided against staying on a houseboat (de rigueur during a visit to Kerala) on my own, as I thought the experience would be better shared. However, I did spend a most wonderful, relaxing day on the ferry which took me through the shimmering waterways up to Aleppey, passing small communities on the way. The trip was topped off by the most incredible sunset. If only all my journeys could be made this way. 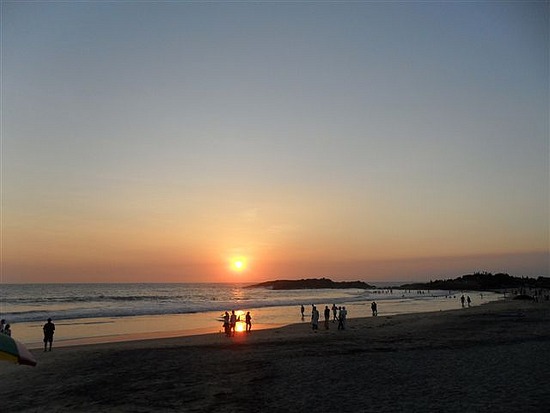 By stark contrast, the following day’s bus ride to the hilltop Periyar WildlifePark was an absolute nightmare. There seems to be only one class of bus in India and it isn’t “First”. Luckily I arrived early and managed to get one of the last few remaining seats by the window. The bus was fully air-conned (there wasn’t actually any glass in the windows!). Although well before the scheduled departure time, as soon as there was no standing room left, we took off (I am becoming wary of this practise and always turn up at least 30 minutes before the bus is supposed to leave), and at that early hour the breeze coming in the “window” was freezing. I ended up with my blanket, scarf and hat on until someone pulled the blind down completely obscuring the views. Finally the sun filled the sky and it warmed up. 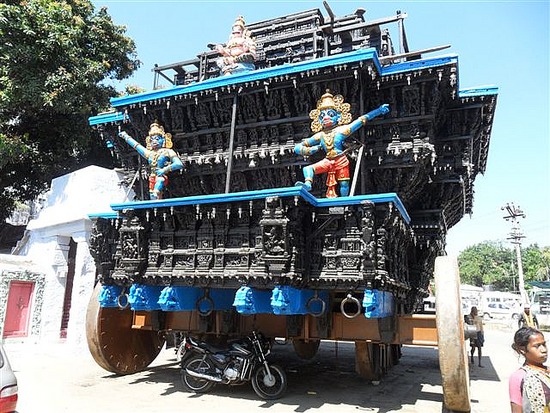 As previously mentioned, the driving here is unbelievable. Indian drivers are just not content to drive along the road in a single file. Even in the middle of crowded towns, they are constantly trying to overtake and cut each other up to get ahead. Why??? My journey turned into what I can only describe as a white knuckle ride.


As the bus wound it’s way up through the mountains and along hairpin bends at death defying speeds, everyone had to cling on to the back of the seat in front or the window sills to avoid being thrown around. My driver then had an attack of road rage after the bus in front refused to let him past. He spent a good 10 minutes on the wrong side of the road, honking his horn (another habit the Indians seem to be obsessed with) and finally cut past the bus on a blind bend, almost causing an accident. All for nothing, as he had to stop a few minutes later to let people off! Incredible.Kerala Pt 2 to follow soon….